Judges taste some of the entries at last year’s Smoke on the Plains BBQ & Music Fest. This year’s event, to be held June 10 and 11, will add back at least one competitive element with the return of People’s Choice.

If your taste buds are salivating, it might be muscle memory, as Derby’s annual Smoke on the Plains BBQ & Music Fest is right around the corner. The city will once again hold this year’s festival at High Park June 10 and 11.

Smoke on the Plains 2022 will be marked by the return of the People’s Choice competition, which took a brief hiatus last year. The event is coming back fully loaded – with attendees able to get more bang for their buck this time around. Tasting kits (available for $5) will offer participants a total of six two-ounce samples of pulled pork, compared to eight ounces total previously. Additionally, while attendees visited competitors’ booths in the past, blind judging will return for the competition this year and be done at one central location.

On top of the format changes, the People’s Choice contest – which normally draws at least 30 competitors – will also be moved up to the first day of the festival, going from 7 to 9 p.m. June 10. There will also be a slight shift in location, with the contest being held in the parking lot next to the Zimmerman Shelter (toward the southwest corner of the park).

Along with the return of one of the staple competitions, organizers are adding some new elements, including an option for brunch on the second day of the festival with Bloody Marys and Mimosas. Shaken or Stirred will provide the brunch staples from 9 to 11 a.m. June 11 while Taters N Toppings and Snack Shack food trucks will offer breakfast items.

“I think with moving our People’s Choice contest to Friday night, which is usually on Saturday, we wanted to bring something different as a Saturday event,” said Derby Director of Communications Kristy Bansemer. “We’re just trying to draw more people out to the park early.”

Having the food trucks in the park for the morning event, concerts are also planned to start earlier at 9 a.m. June 11 to help in drawing a crowd. The Kids Corner – returning like the People’s Choice contest – will run from 9 a.m. to 3 p.m. and appeal to the younger festivalgoers with face-painting, bounce houses and more.

During Paramount’s headlining performance from 6 to 10 p.m. June 11, organizers will also be introducing a new ‘80s Night Big Hair contest. Judging will take place at 8 p.m., with the winner receiving a prize package from The Butcher Shop Salon.

While there is no joint contest, The Silver Bullet Band will perform the headlining set from 7 to 10 p.m. June 10.

Other festival activities include a cornhole tournament put on by the Derby Recreation Commission, axe throwing (new in 2022) and the signature barbecue and steak cook-off contests happening June 11. Organizers noted members of the public are encouraged to sign up for the steak cook-off, with May 20 the deadline to enter.

A beer garden and food trucks will be featured on both nights of the festival,

with the event looking to offer something for everyone.

“I think each year we try to change things or add things that we think will bring more value to the event or maybe attract a different group of people,” Bansemer said. “We know that community events are very important to Derby residents. We can tell that just by how well they’re attended – from Spring Into Art to the barbecue [festival] to the Fourth of July to our tree lighting. I know that all of our events we work to offer free of charge … so really [we’re] trying to give something back to the community.”

For a full list of scheduled events or to register for any festival contests, visit derbybbq.com. 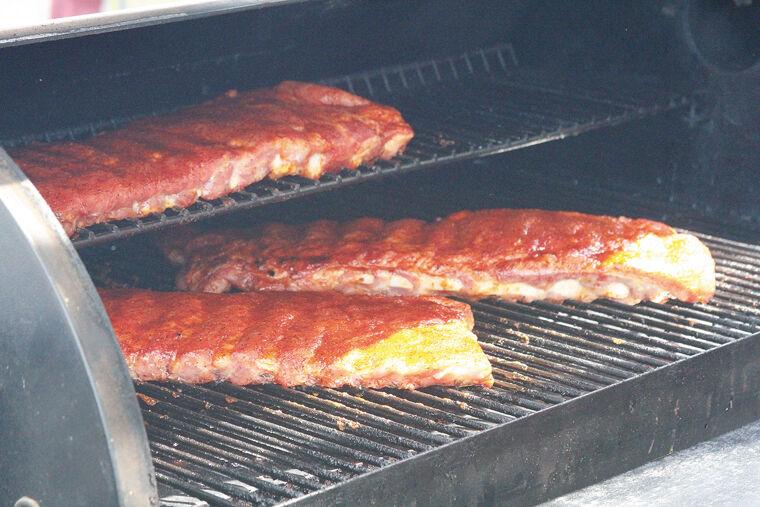 The pit masters will be out in full force at High Park once again this year, with both professional and backyard BBQ competitions being held as part of Smoke on the Plains.

Mariana Sosa worked hard to earn her diploma from Derby High School to set a positive example for her siblings and others like her.

Given the proximity to McConnell Air Force Base, unconventional paths to graduation are nothing new at Derby High School.

Mariana Sosa’s path to earning her diploma from DHS would certainly qualify as unconventional, but the recent transfer was committed to hitting that milestone this year once she arrived in Derby.

Born and raised in California, a sudden eviction in summer 2021 led her family to begin the path toward Derby right before the start of her senior year. With five days notice, they were evicted from their home in El Monte, Calif., and moved in with family in Mexico – an eye-opener for Sosa.

Prior to the move to Mexico, Sosa had been attending continuation school – an alternative means of seeking high school diplomas for students at risk of not graduating – for two years. Sosa was enrolled in the program following the death of one of her older sisters, which sent her into a bad depression.

“I couldn’t motivate myself to get out of bed, to do anything,” Sosa said.

Not making progress in continuation school while in California, upon moving to Mexico Sosa knew she had nothing else to do but try, attending the same alternative program remotely. Mexico presented different challenges, though, with limited internet access making it hard to work with teachers, contact them by email, etc.

Seeing how her mother was raised and all the sacrifices she made – not being allowed to finish school past the sixth grade – helped motivate Sosa to recommit to her education, for herself as well as her five younger siblings.

“We’ve been homeless about eight times, and I was so tired of suffering. I knew that the only way to better myself was through that education, and I knew that there wouldn’t be an end to this unless I put myself out there and worked for my family,” Sosa said.

Knowing her younger siblings would look up to her and seeing the negative impact not being in school had on them in Mexico only helped cement her graduation goals when the family relocated to Derby at the start of 2022.

Growing up in poverty with immigrant parents, Sosa wanted to make a positive change. Ultimately, Sosa and her family moved to Derby to be closer to her uncles, with the move proving to be the right fit to get her back on track.

“Derby has offered me great opportunities in realizing that I’m not a lost cause. I came here thinking that I wasted all of my potential and that I wasn’t ever going to be able to graduate,” Sosa said. “I know I’m still capable and there’s still time for me.”

Among the opportunities Derby has provided was the opportunity to go on a field trip – normally open just to sophomores and juniors – and hear from motivational speakers in the Kansas Hispanic community.

On top of that, Sosa noted all of the staff has been extremely encouraging as she worked to make up the 14 credits she was missing in her final semester.

“Here, I was very motivated and touched by just how much these teachers pay attention to their students,” Sosa said. “They remind me every day that there’s somebody on my team and they really want to see all of their students succeed, and that’s been very moving.”

Following graduation, Sosa noted she is looking to attend community college and study psychology to “give back” and be a voice for those needing help who may not know how to ask. While she did not get to pursue any psychology classes at DHS, she noted staff have helped put her on the right path to explore that career option.

Mostly though, Sosa hopes her graduation will inspire her younger siblings – four currently enrolled at DHS and one at Derby North Middle School. Knowing that she faltered while in continuation school, she hopes to set a positive example for her siblings and others, and is grateful for the chance a Derby High School education has given her.

“Before I came to Derby, I had no motivation for myself. I did not know what my future was going to be like, and now that I’ve reached this diploma I know I’m capable of anything. I know that it doesn’t matter where I come from, where I’ve lived and what I’ve seen because there’s still opportunities for me to succeed having this diploma,” Sosa said. “It’s just going to unlock so many doors that for so many years I thought had already closed on me.”