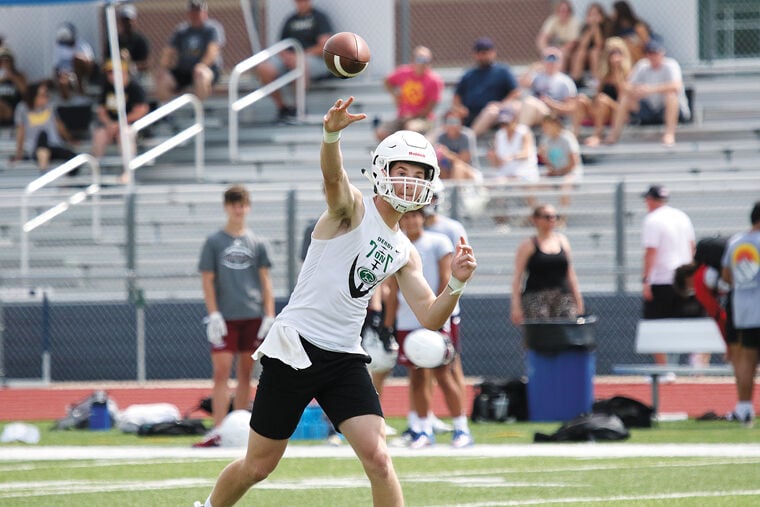 Quarterback Mercer Thatcher throws the ball to an open receiver. Thatcher was one of three quarterbacks used in the tournament. 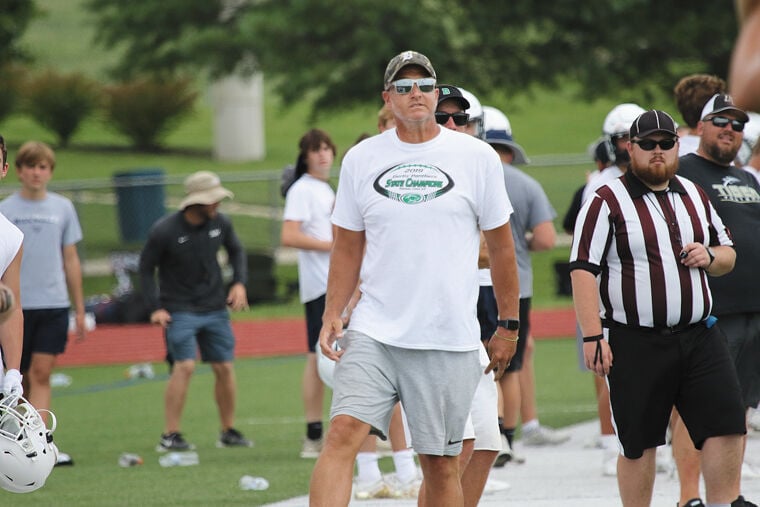 Quarterback Mercer Thatcher throws the ball to an open receiver. Thatcher was one of three quarterbacks used in the tournament.

Derby High School football competed in the KC Elite seven-on-seven tournament at Mill Valley High School July 16-17. The Panthers went 9-1 in the two-day tournament and were named champions after a lightning delay canceled the final against Blue Valley.

“I was very happy with the way our kids competed,” Derby football head coach Brandon Clark said. “I thought we started off slow, but throughout Friday (July 16) we progressed very well. On Saturday (July 17), the kids competed, had confidence and played really well.”

In the round-robin play, the Panthers finished as the top seed with a 5-1 record. Derby cruised by Blue Valley and Olathe West in the morning, but the lone loss of the weekend came to Saint James in the second game of the group stage. Derby rounded out the second half of the day with wins over Center, Mill Valley and Staley.

In the double-elimination tournament the following day, the Panthers got off to a sluggish start but avoided the upset with a 19-18 win over Staley in the opening game. Derby got revenge on St. James with an 18-10 win in the second tournament game, which lined up a semifinal against Mill Valley, the team that handed Derby a 45-14 loss in week one of last season.

“As a coach, the most exciting thing about the weekend was just seeing our kids competing,” Clark said. “As a spectator, it was probably the Mill Valley semifinal.”

The Panthers punched their ticket to the finals with a 27-25 win over Mill Valley. Derby trailed late in the game but a touchdown and conversion with four seconds left on the clock kept the winning streak alive.

Blue Valley was the scheduled opponent out of the losers bracket, and Derby would have to lose back-to-back games to lose the title. Unfortunately, the tournament was canceled before the final due to lightning in the area.

Overall, the weekend provided a time during the summer to compete against high-level competition.

“We are used to only seeing ourselves, and it allowed us to compete against other teams,” Clark said. “It allowed us coaches to see which kids are not scared to put it all out there and compete, and we saw that this weekend.”

Not only was the tournament a chance to develop as a team before the start of practice, but traveling out of the Derby area provided an opportunity for the team to bond before the season.

“It is good for the kids to come together as a team and compete together,” Clark said. “All the stuff off the field like going out to eat, staying in the hotel and hanging out in between games is very valuable to our team.”

The search for an opponent for week one is still in progress, but the first official practice for the Panthers will be Aug. 16.

Blue Valley (Canceled due to
weather)