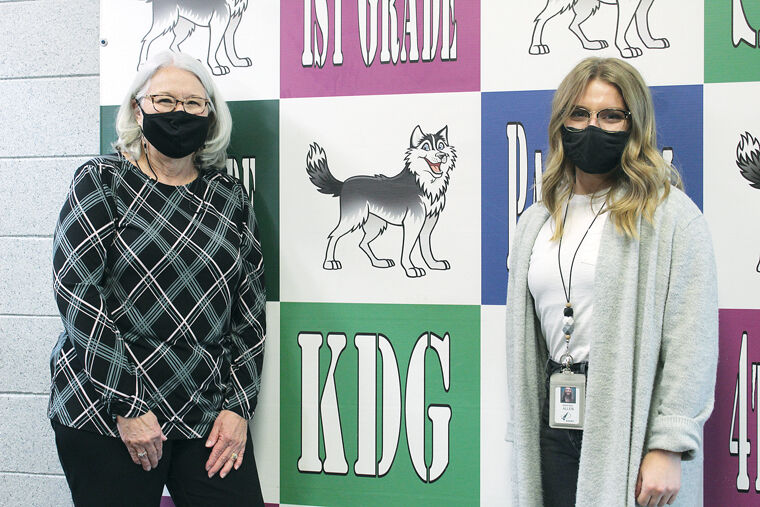 Park Hill kindergarten teacher Sheryl Nedrow, left, retired this school year and will be replaced by Makenna Allen, one of Nedrow’s former kindergarten students. Nedrow said it is a blessing to know that her job will be left in good hands.

Park Hill kindergarten teacher Sheryl Nedrow, left, retired this school year and will be replaced by Makenna Allen, one of Nedrow’s former kindergarten students. Nedrow said it is a blessing to know that her job will be left in good hands.

It’s every teacher’s hope to leave an impact on their students that will last a lifetime. Sheryl Nedrow, longtime kindergarten teacher at Park Hill Elementary School, has surely accomplished that goal with at least one student.

Nedrow retired this school year and will be replaced by Makenna Allen – who was a student in Nedrow’s kindergarten class about 17 years ago.

Allen, a lifelong Derby resident and Wichita State University graduate, worked in the spring as a building substitute at Park Hill. While student teaching in the fall, she had the opportunity to shadow Nedrow and return to the school that once sparked her love for the classroom.

“She always made learning fun – it didn’t feel like a chore,” Allen said.

Allen said some of her fondest memories include seasonal crafts and activities and Nedrow’s “star student” program – which highlights a specific student in the class and honors what makes them special.

“I thought it was special when I was a kid,” she said. “It’s even more special getting to see it on the other side.”

While earning her degree at Wichita State, Nedrow taught pre-school in a church setting for several years. Her entire career in the public school system has been spent teaching kindergarten, beginning at Carlton Elementary 22 years ago.

After Carlton closed, Nedrow was the first kindergarten teacher at Park Hill. Allen was in one of her classes during the 2003-2004 school year.

Next year, Allen will be one of three kindergarten teachers at Park Hill, with her

“It’s been so special,” Nedrow said. “To go that extra step and know that she’s going to be here in my room when I leave – it’s been very emotional.”

In her retirement, Nedrow said she’s looking forward to spending more time with her parents, her two married kids and seven grandkids. Her husband retired this year.

“You know, being able to have a bit more freedom to be able to go to those functions,” she said. “We have several states that we’ve never visited, so our goal is to do a little traveling.”

Having taught children for a total of 30

years, Nedrow said she sees herself teaching and working with young students in some capacity even in her retirement. She plans

to take some college courses this summer

and renew her teaching license “one more time.”

“The hardest thing is … a lot of people say they’re really ready to retire. And I have to tell you, I’m not ready to not teach and not be with kids,” she said. “Teaching, even when you’re not doing it as a job, it’s still so much a part of you. You can leave the job, but your heart is still about teaching.”

Allen said she’s learned valuable lessons about teaching kindergarten through Nedrow, whether through direct pieces of advice or just by simply watching her work. She said the most important lesson she’s learned is to make learning fun and hands-on to keep students engaged.

“I strive to be like Sheryl [Nedrow],” she said. “I want to be that kindergarten teacher. Everybody knows Sheryl because she’s made such an impact on all their kids.”

Allen said she looks forward to starting her career at Park Hill, meeting her students for next year, and being “at home.”

“This is where I belong.”