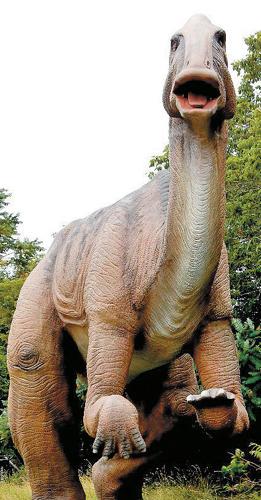 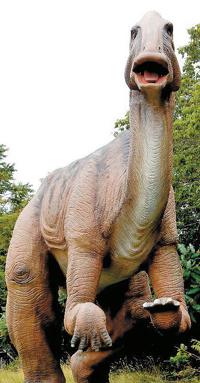 A proposed dinosaur park in Derby will have an exhibit of animatronic dinosaurs, such as this one, along with indoor and outdoor displays, a three-level domed ropes course, 18 holes of miniature golf, a fossil dig site, a zip line and a public fitness trail. There also will be an open-air amphitheater.

The long-awaited Derby STAR bond district was authorized by the state this fall.

That means the district, including a proposed dinosaur park, may proceed with development.

City officials received the news in the form of a letter dated Oct. 19 to Mayor Randy White from Kansas Department of Commerce Secretary Antonio Soave.

“It is my determination that the Derby project constitutes a major commercial, entertainment and tourism area and is therefore an eligible area within the meaning of the act,” Soave wrote.

Soave also approved the issuance of up to $18.9 million in STAR bond financing for the project. The dinosaur park and related attractions are planned for a 49.5-acre parcel at the northwest corner of North Rock and Patriot. The entire district is much larger at 233 acres and goes from Meadowlark north along Rock to Derby North Middle School.

Along with its family orientation, City Manager Kathy Sexton said the attraction, formally known as Field Station Dinosaurs, will be an economic development instrument that will provide business growth and jobs for Derby teenagers. The park could be open in 2018.

But there will be no action without the sale of the bonds to private investors. Documents need to be prepared for the sale and the bonds must be marketed.

Stifel has begun its work to gather necessary information from the developers and from the city, Sexton said. The bond process will be underway during the next three to four months, she said.

STAR, or sales tax revenue bonds, are special financing devices used by developers to spur on projects. They’ve been heavily used in the Kansas City, Kan., for a variety of developments including Village West, a shopping, dining and entertainment complex in western Wyandotte County.

Derby’s park is planned to have an exhibit of animatronic dinosaurs, including indoor and outdoor displays, a three-level domed ropes course, 18 holes of miniature golf, a fossil dig site, a zip line and a public fitness trail. There also will be an open-air amphitheater.

Along with the park, the project includes a full-service hospital, hotel and restaurant.

The $18.9 million of STAR bond financing is about 11 percent of the projected $160 million total development expense. Soave said the situation “represents a true public/private partnership benefiting the region and the state.”

In making the approval, Soave said he considered project criteria. That included projected visitation, economic impact, the commitment from the developer and city and the uniqueness of the project.

The project has unique tourism potential with the ability to bring up to 1.2 million visitors to the area each year, he said. The projected economic impact includes yearly retail sales of more than $85 million along with more than 868 full-time equivalent jobs, he cited. That employment would have an annual payroll of $22.9 million plus, he said.

Soave said he and his department looks forward to working with Derby city officials on what he termed “this exciting project.”

Approved by the city council

On July 26, The Derby City Council passed, by a 7-1 vote, a development agreement for the long-discussed concept along with the STAR bond district necessary for its creation.

It didn’t come without discussion.

During a lengthy July 12 public hearing, opinion was fairly evenly spilt, pro and con, on the overall concept, but while some objected to a tax break for selected business, there seemed to be scant opposition to any business that wanted to go ahead and build on its own.

Sharon Keagy, a retired teacher, said after time, a visitor attraction’s pull declines, such as it has at Wichita’s Exploration Place.

“Derby can continue its growth without such an attraction,” she said.

Natalie Weber, who said she spent many hours researching the proposal, also has her doubts.

“If it sounds too good to be true, it probably is,” she said. “The projections are unrealistic, the plan is risky and the proposal is insufficient,” she said.

Backers of the project say that more visitors will come than is realistic, she said.

Weber also said that instead of letting the free market drive the project, this will give the developer an unjust handout.

Helen Parrish also believes the concept is not fair to other business.

“No matter how small, it’s still a subsidy,” she said.