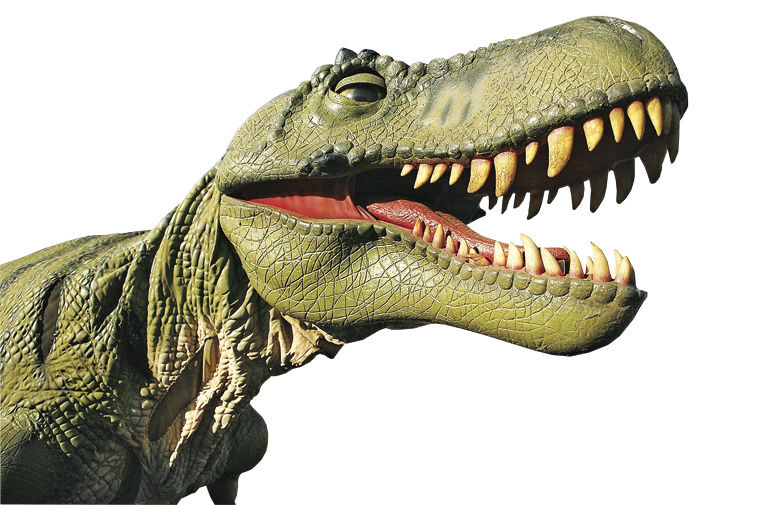 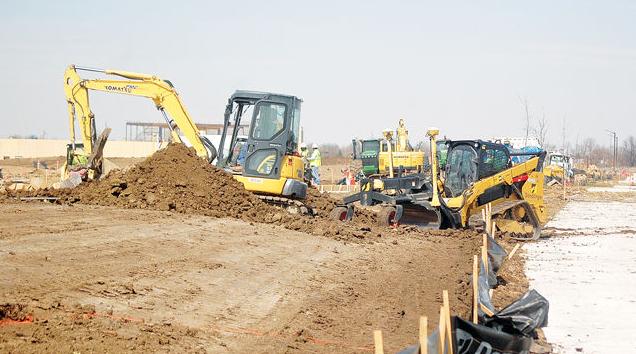 Construction crews work in late March to get the infrastructure in place to accommodate Derby’s new dinosaur park. The rush is on to finish the project as the park is set to open on Memorial Day weekend.

Travel by the northwest intersection of Rock Road and Patriot Avenue for the next couple of months and you’ll see a flurry of activity. That’s because there’s a lot of construction work underway as crews prepare the site for Derby’s newest attraction, Field Station: Dinosaurs. The infrastructure, such as the roads and utilities, are being put in place, and it will all reach an apex this Memorial Day weekend with the park’s grand opening.

There will be a special VIP opening May 25 before the park is open to the general public. Then the attraction opens to the public the next day.

There’s been a lot of buildup to the opening, including a groundbreaking event late last year. Park officials also displayed a T-rex model in Wichita during the recent NCAA basketball tournament in order to publicize the attraction.

There also is much behind-the-scenes activity taking place. The dinosaurs are being shipped to Derby, where they soon will be installed. Also, the main force behind the park, executive producer Guy Gsell, along with his team, have been busy hiring the staff needed to operate the park.

They held a job fair earlier this month in Derby and were pleased with both the quality and quantity of candidates. Gsell believes the park will have the right people in place by May. They will undergo training and get familiar with the park and its operations for a few weeks before the grand opening.

The seeds for the park, which is being built on a 13.8-acre parcel, were planted several years back with city leaders researching the concept.

The ball really got rolling in 2016 when the project was approved and the all-important bonds were later sold.

The bonds, officially known as STAR Bonds Series 2017, are designed to provide some $18.9 million in funding part of the project along with building its infrastructure.

The actual approved amount was $20.4 million, which provides a cushion for related expenses.

STAR, or sales tax revenue bonds, are special financing devices with a state tax exemption that are employed by developers to spur on projects.

In case of a default or other financial problems, the bondholders, not taxpayers, take any losses.

The dinosaur park, related attractions, and new businesses are planned for a 49.5-acre parcel. But at 233 acres, the entire district is much larger and goes from Meadowlark north along Rock to Derby North Middle School.

Of course, the dinosaurs are what will get the most attention. STAR bond districts need such an anchor to qualify and the giant moving creations do just that, developers said.

While dinosaurs are long extinct, the giant creatures continue to amaze people of all ages, including adults, although they have a special magnetic pull for children, Gsell and others say. That’s because they were real.

As children grow, they begin to realize that treasured figures such as Santa Claus and the Easter Bunny – while friendly and fun – were invented by adults. But dinosaurs were real. They once roamed the Earth, and that fact simply fascinates children, Gsell said.

Besides the dinosaurs, other park attractions include a theater, miniature golf, and a ropes course.

Also planned near the park are commercial ventures such as a restaurant, hotel and retail outlets, but those have not yet been finalized. What is finalized and well underway is a medical facility called Rock Regional Hospital. That building can be seen being built north of the dinosaur park.