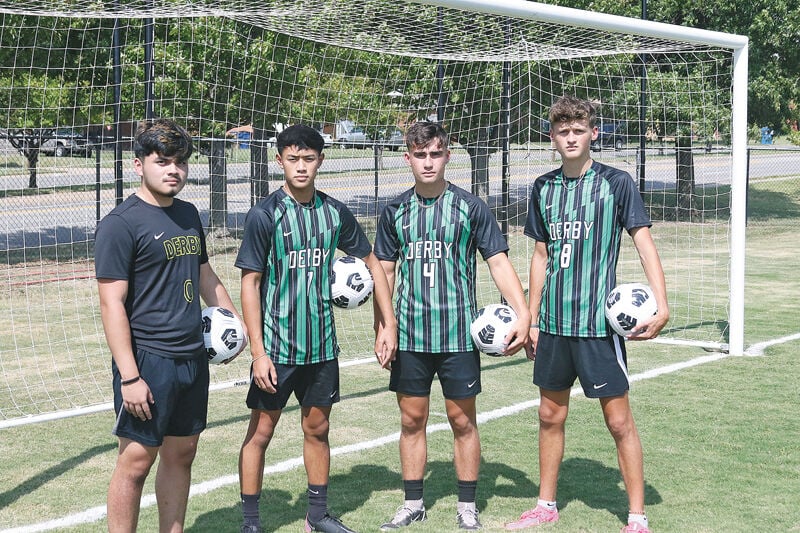 (Left to right) Xavier “Gato” Vaquera, Andy Denesongkham, Scott Simmons and Caleb Day will be the core group of seniors that Paul Burke will be relying on to lead the Panthers in 2021. 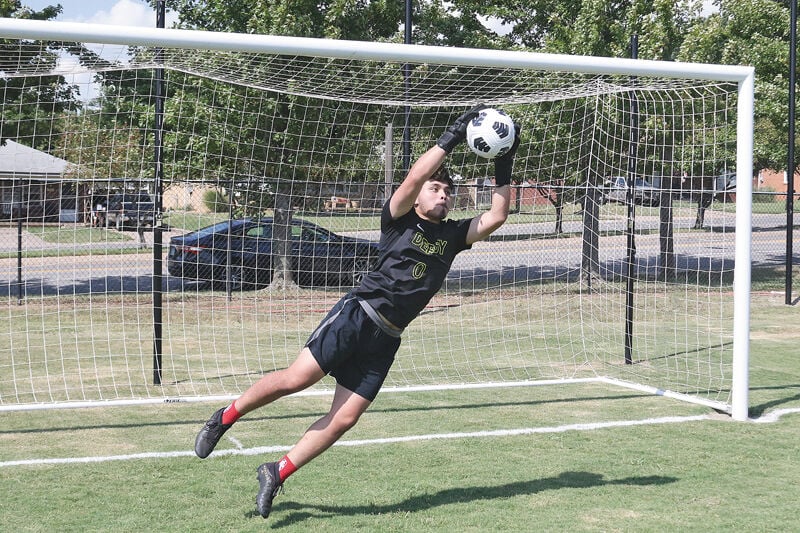 Entering his third season as the starting goalkeeper “Gato” Vaquera gives the coaching staff a reliable, experienced leader in the back.

The expectations for the 2021 installment of Derby boys’ soccer are high, and taking the next step is the goal for a squad with a solid senior class.

The program made significant strides last season, highlighted by a regional final win over Campus before losing in the state quarterfinals against eventual 6A champion Dodge City. Despite the loss, it provided a glimmer of hope for the program aiming to return to state for the first time since 2018.

“Getting to that game that we lost to Dodge City was drastically important,” head coach Paul Burke said. “They went on to win state and were undefeated, but to play in the quarterfinal means our players now know what it is going to be like.”

This year the Panthers have solid pieces throughout the starting 11 backed with a strong core of seniors. Scott Simmons, Andy Denesongkham, Caleb Day and Xavier “Gato” Vaquera will provide the experience right in the heart of the Panther lineup.

“Simmons will be the center back, Denesongkham and Day are going to be the center midfielders and Vaquera is our goalkeeper,” Burke said. “So, that is our core in the middle of the field. We are strong in about every spot up the middle, and we will have to add the pieces.”

The Panthers could have some growing pains early in the season with potentially five sophomores in starting roles. Still, the varsity experience that the rising sophomore core received last season will be crucial for Derby’s success.

“The expectations are high with all that experience of the senior class coming back, plus all the freshmen who played in that quarterfinal game that are now sophomores – that is the core that has to be the next step,” Burke said. “Now the question is if they are going to step up to the plate or if we are going to be relying on our main guys.”

The experienced duo of Denesongkham and Day will lead the midfield but finding a lethal goal scorer is the biggest question for the Panthers.

“We are going to let them run the show and do what you can do to create chances,” Burke said. “Day might have to be more of a goal scorer. He is naturally more of a creator.”

The Panthers participated in summer soccer tournaments in both Kansas City and Wichita. According to Burke, the summer opportunities gave him and his coaching staff a better picture of the depth of the squad. In these tournaments, the coaching staff decided to make a switch and move Denesongkham to center mid and Simmons to defensive back.

Denesongkham has helped Derby in multiple areas and played all over the field, primarily as a defensive back, but he excelled in the center mid role in the summer.

“He’s the fastest guy, and last year we played him as a defender, and nobody could get around him, but he could play out of the back. He went to Kansas City and we experimented with him in the midfield, and it was like a lightbulb came on.”

Simmons will have a crucial job as the leader of the defense in the 3-5-2 formation that the Panthers want to enforce against teams in the AVCTL-I. According to Burke, the decision to move Simmons from center mid to center back was an outcome of the two tournaments played in the summer. The chemistry with Vaquera behind him will provide solid communication in the back.

Panther soccer will begin the season with a road test against Wichita Northwest on Aug. 31.