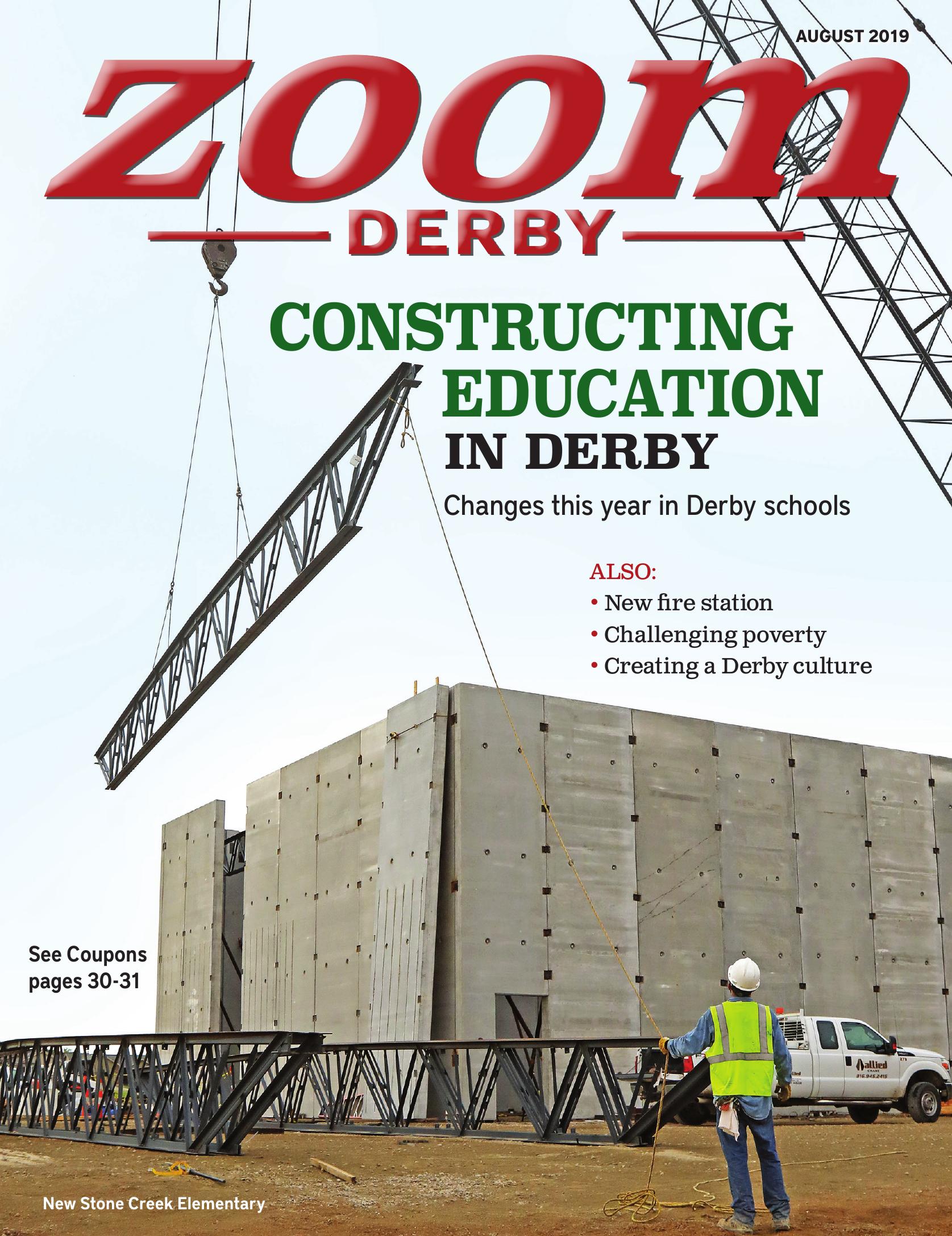 School district Director of Operations Joe Dessenberger closes one of the steel door window covers in a new tornado safe room that was constructed at Park Hill Elementary.

Fans will sit on new Derby designed bleachers that were installed this summer at Derby High School.

The majority of the hallways at Derby High School now have new flooring.

Ask USD 260 Director of Operations Joe Dessenberger about the improvements students, staff and parents will notice when school starts in the fall, and like GPS, he maps the district’s bond projects out in his mind.

“We are wrapping up at Park Hill. We just did the first part of our punch list walkthrough today with the contractor,” Dessenberger says on July 12. “We are extremely close to being completely done.”

Crews have snazzed up the exterior, put in sidewalks, seeded grass, carpeted rooms and painted walls.

“The teachers are going to be occupying these spaces in a week or two before school starts,” Dessenberger says. “Park Hill looks a lot different.”

From there, his mind routes to the tennis courts near his office on Woodlawn Avenue.

“The last time we were out here,” he says to a reporter, “they looked like kids out there with their Tonka toys moving dirt around.”

The courts will be ready for play in the fall.

Work is moving steadily along on new soccer fields, although because of weather delays, “we do not expect to be playing soccer there the first few games of the season. It will depend on when the sod is safe for playing. We will continue to evaluate at what point we can play soccer on that field.”

Soccer teams play at Panther Stadium. That arrangement will continue.

Then it’s on to El Paso Elementary.

“Wow,” Dessenberger exclaims, “what a difference in that building.”

El Paso was “very dated. What has been accomplished in the core center of that area has just been phenomenal,” he says. “They’re right on schedule. We intend to take full possession of classrooms and the media center and resource rooms about Aug. 6, which is the date staff return to work.”

Crews have remodeled one set of bathrooms, and they’ll finish another set likely about a week after school starts.

“The only thing left in that building to do is at some point we need to come back in and remodel the cafeteria,” he says. The school has changed so much, he says with a big smile, that “I walked through it last week with the principal, and she got lost.”

At Derby High School, crews are installing flooring that makes spaces brighter and more modern. Other improvements include new bleachers and a repainted gym.

“All the green [paint colors] will match in the gym,” Dessenberger says. “The competition gym feels so much different than it did last year. The spectators will be proud to call this their school. The visitors who have been to our school before will walk in and be very surprised. I don’t think that they’re going to recognize that building.”

The new Stone Creek Elementary School is beginning to “rise up out of the earth, and that’s an exciting time,” Dessenberger says. “It’s starting to take shape. I think most of our neighbors are excited about it.”

That project is running about a month behind because of rain. The district had planned to take possession of Stone Creek on Aug. 1, 2020. Now the hope is July 15, 2020.

“We’ve enlarged the parking lot. Obviously, we can’t fix the access to the parking lot, but the front of the building, the street view, the new addition is visible, and it looks different, which is going to make the school feel different” for students and staff.

The “tiny little office” to the right when people would walk in will become a latchkey office.

“When you walked into the building, the office was right there,” he says. “To get anywhere else, you had to walk through the cafeteria. You had to go through that big space, and that big space was very dated with an old wooden stage. All of the old flooring is gone. The new addition includes two kindergarten classrooms, some administrative spaces, some resource rooms. The adjacent rooms feel new because we had to remodel those spaces as we moved walls and connected the new addition to the existing part of the building. There’s new paint, new carpeting. At the back of the building, the media center has moved to an exterior wall. Additional resource space has been built where some of the classroom space existed. There will be four classrooms off of a hallway instead of off of the media center. We remodeled three sets of bathrooms, and those were some of the worst in the district.”

Overall, the bond projects voters approved are “going really well,” he says. “We’re looking forward to closing out some of these first round of bond projects.”

In late August, crews will break ground on the new administrative addition and start projects at Tanglewood, including a storm shelter.

In October, crews will break ground on a new gym at Derby Hills Elementary and begin remodeling work at that school.

“Most of the big work there will be done next summer,” Dessenberger explains.

In early November, phase two of improvements at the high school will get underway, including a third gym/multipurpose area and a new storm shelter that also will serve as alternative leaving space. Interior remodeling in the auditorium will begin in summer 2020.

“Work on Panther Stadium will kick off after the last playoff game of the season. Right now, we’re shooting for Nov. 23 because we know that we’ll be playing Nov. 22,” Dessenberger says, smiling. “No pressure on the coach there.”