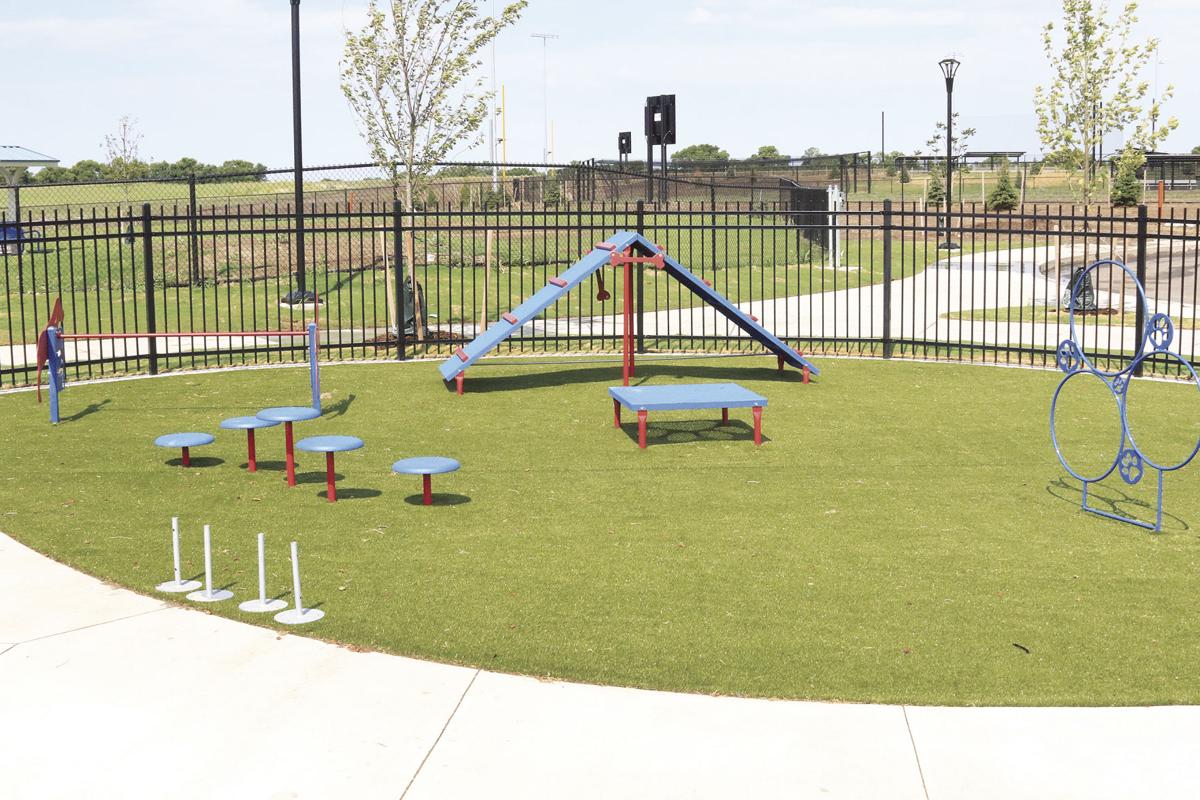 An agility course is one of a number of features that will be included in the dog park, slated to open in fall 2020, at Decarsky Park. 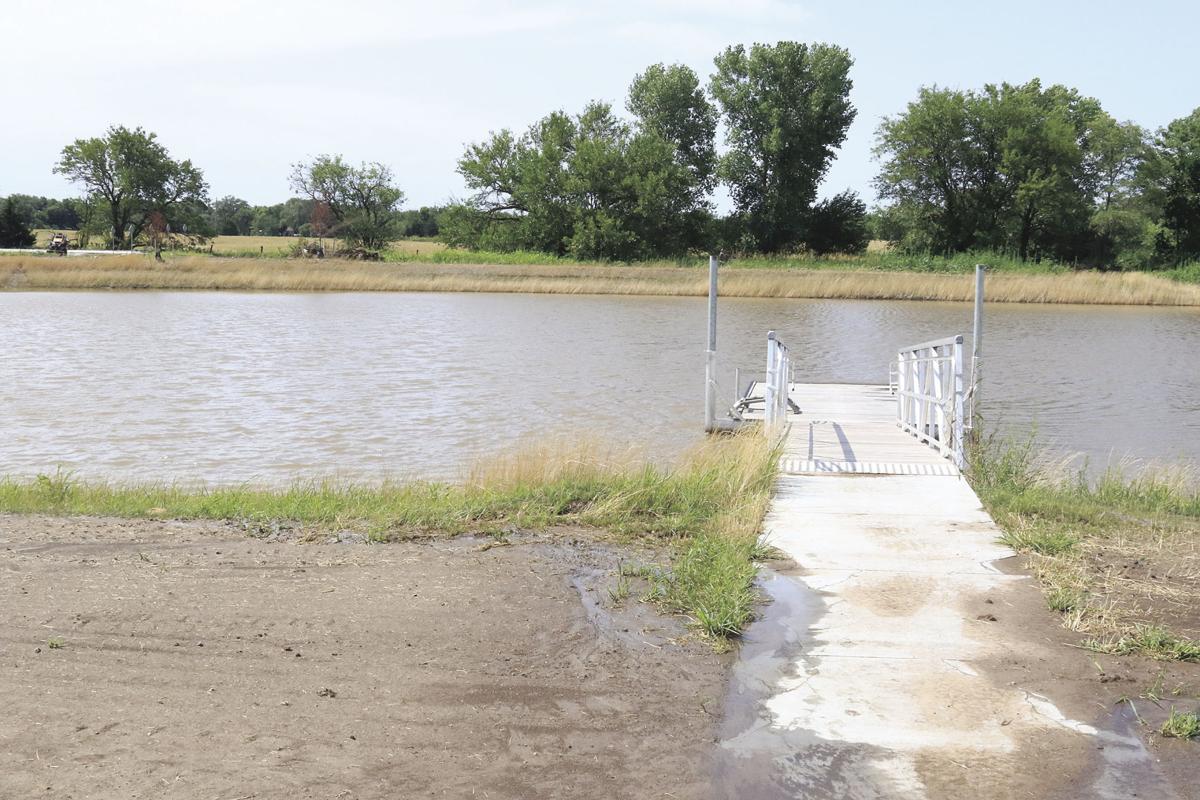 One of the more unique features of the dog park is a floating dock on the retention pond where owners will be able to train their hunting dogs.

An agility course is one of a number of features that will be included in the dog park, slated to open in fall 2020, at Decarsky Park.

One of the more unique features of the dog park is a floating dock on the retention pond where owners will be able to train their hunting dogs.

A small group of city staff, council members and community patrons got a sneak peak at Derby’s latest parks addition – Decarsky Park (west of the intersection of Line Drive and Rock Road) – on July 9. Featuring a dog park, multiple ball fields and more, the park is slated to partially open in fall 2020.

The dog park will be the first amenity of phase one construction open to the public, with multiple features set up on three acres of land – including an agility course with six obstacles, two large and small dog yards (1.4 acres each) with built-in water bubblers, shade structures, drinking fountains, a washing station and more.

Director of Parks Steve White stated that all the yards are irrigated, with the agility course lined with artificial turf to help wash out urine and control odors. Additionally, there will be two separate entrances to the agility course and a “penalty box” along one of the yards to help control behavioral issues among canine visitors. Design (which began in 2017) was also addressed to prevent entrapment corners in any of the yards.

One of the more unique features is the floating dock on the retention pond installed in phase one that will also be utilized as a training area for hunting dogs – with no human swimming or fishing allowed.

“It’s going to be exciting to see how people use this facility out here,” White said.

Hours of operation for the dog park will be sunrise to sunset, with plans to close the park on Monday mornings to allow for routine maintenance, according to White.

Following the opening of the dog park, the plan is for the four ball fields included in phase one of the Decarsky Park project to be available for use starting in spring 2021.

With four fields at Decarsky park, there would be the potential to host a number of tournaments at the facility – which City Manager Kathy Sexton noted the Derby Recreation Commission is already researching. Additionally, with the structure of the fields (drainage, infield turf, etc.) it was pointed out that rainouts would be less of a factor in the future.

“Usually rain puts us out for a couple days with our fields,” Sexton said.

“This will allow us to get playing much, much quicker,” White said. “It can rain several inches an hour and it’s not going to jeopardize the playing condition.”

Along the fields, a number of structures have been implemented for safety and comfort of players and fans alike (i.e., vented dugouts, shaded bleachers, etc.). There will also be two double batting cages adjacent to the fields, a picnic shelter, a concession stand near the entrance to the ball fields with additional patio seating, three restrooms (which can be used year-round) and a maintenance shed with showers for umpires.

Landscaping was also heavily factored into the Decarsky Park project, with 200-plus new trees planted at the facility (featuring 27 different species native or adaptive to Kansas) – with a number lining the entrance plaza between the two parking lots. White also pointed out that the Latitude 36 Bermuda grass featured in the park (in the dog yards, outfields, etc.) is the same grass used by the Wichita Wind Surge in their new stadium and the Kansas City Chiefs.

Phase one of the project came to a total of $7.1 million, funded by the Derby Difference Sales Tax, with a number of contributions from other community partners – like the Derby Recreation Commission (for a fourth ball field), the Rotary Club of Derby and Derby Community Foundation.

Additionally, Sexton stated that Vicky Decarsky’s donation of land (valued at $800,000) for the park was the single largest gift the city has received for a project. That included 63 acres of land total – with 33 set aside for phase two of the Decarsky Park project.

Derby’s Parks Department will readdress its master plan in 2022, helping to shape phase two of the Decarsky Park project. Currently, there are plans to add an additional parking lot and four more ball fields, but that could all change depending on usage of the phase one amenities.

“Everything’s on the table; you just need to get the funding source,” Sexton said.

Usage of other city fields will factor into those phase two plans and what additional work is done, but for city staff and council members getting to preview Decarsky Park there is a feeling the project is off to a good start.

“I can hardly wait for you to open it,” said Derby City Council member Jack Hezlep.

“This is going to be another one of those things that Derby’s going to do pretty well,” said Mayor Randy White.

“I think phase one will meet a lot of needs,” Sexton said, “and impress a lot of people.”