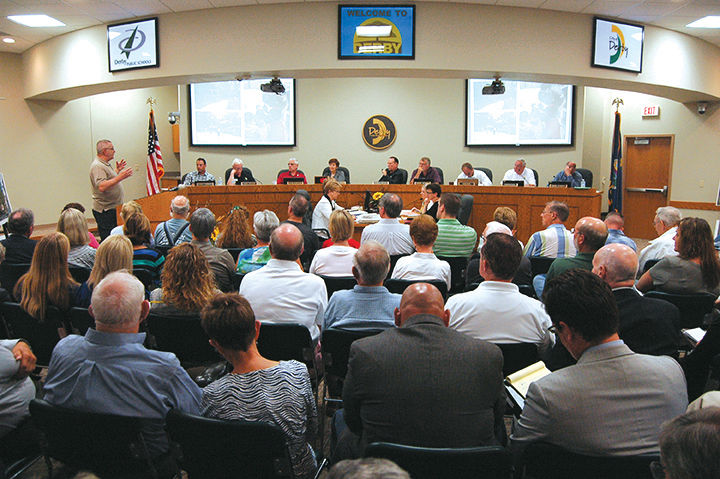 Well over 100 residents  attended the public hearing Tuesday night at City Hall on the proposed STAR Bond dinosaur park and development. Citizens expressed concerns and support of the project.  Council members will vote on whether to approve the project at the next council meeting on July 26. 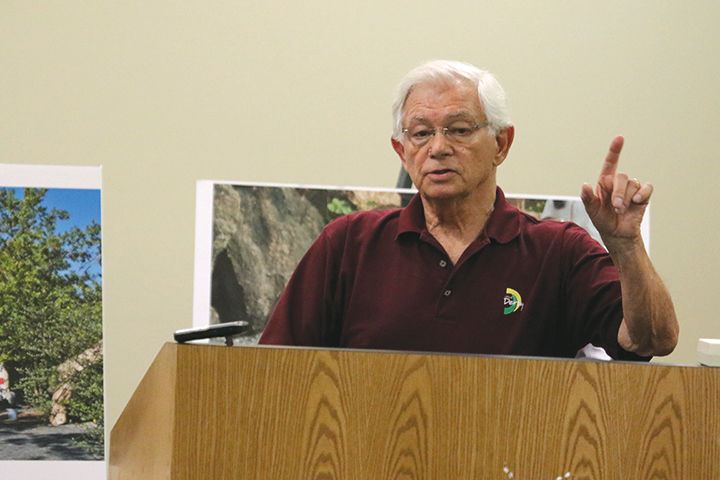 Former Derby Mayor, Dion Avello, spoke out in favor of the project. 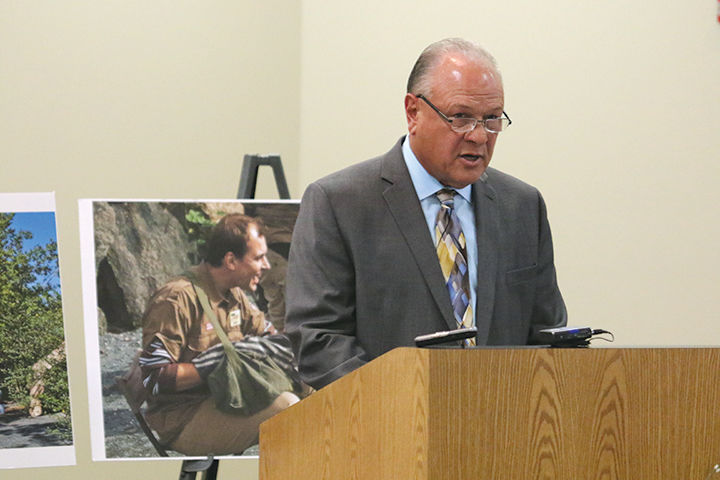 Tom Roberts spoke on how a STAR Bond project in Kansas City helped to reverse an economic decline there.

Well over 100 residents  attended the public hearing Tuesday night at City Hall on the proposed STAR Bond dinosaur park and development. Citizens expressed concerns and support of the project.  Council members will vote on whether to approve the project at the next council meeting on July 26.

Former Derby Mayor, Dion Avello, spoke out in favor of the project.

Tom Roberts spoke on how a STAR Bond project in Kansas City helped to reverse an economic decline there.

After a lengthy public hearing July 12, a vote on a proposed dinosaur park and STAR bond district by the Derby City Council has been set for the council’s July 26 meeting.

The move came after three hours of comments in a packed city council chamber. Some 16 people signed up to speak on the issue for five-minute periods and others spoke after the official comment period concluded. About 110 people attended the meeting, with about two dozen watching proceedings on a video monitor in an overflow area outside the chamber. The hearing was to allow the public to comment on a proposed $159 million development project consisting of a dinosaur park, medical facility and restaurant and retail outlets.

The issue at hand involves approving the project’s plans and considering $23.9 million in STAR, or Sales Tax and Revenue, bonds, which are the project’s heart. Without the bonds, the project doesn’t happen.

Council members listened closely to comments, giving little clue as to which way they were headed. An up or down vote by the council is needed as to whether to send the matter on to the Kansas Department of Commerce to consider the STAR bonds. While that vote will be at the next council meeting, the public hearing part of the process is done with.

If the council approves the bonds, the KDOC then considers them, and with its approval, the project moves forward.

As to whether the STAR bonds should be approved, comment was divided. Some said it would help the city grow and be a positive move, others said it would lead to unneeded traffic problems and bring forth an unnecessary risk to Derby, that would tarnish its reputation if it failed – even if the city wasn’t financially liable.

Speaker Paul Muehring said he was opposed to the dinosaur park aspect of the bond district, but thought other parts of the development were “very attractive.” He expressed concern about a business failure.

“The last thing we want is another Joyland,” he said in reference to the now defunct Wichita amusement park that turned into an eyesore. He also said the council should consider putting the matter to a public vote.

“This venture will bring in a lot of sales tax dollars,” said former Mayor Dion Avello. He also said many other communities are looking at Derby and the growth it has. “We’re on the cutting edge,” he said.

Speaker Tom Roberts mentioned how much STAR bonds helped reverse a decline in Kansas City, Kan., and made it a “successful economic story.”

Other points raised – both for and against – stated that the city should wait until after the general election to make a decision, that the sales tax diversion will be taking needed money from the schools, and it would take away from Derby’s “hometown” feel. Other speakers said that the attraction could quickly lose its appeal and attendance would fall off, but others said the same thing was said about the city’s water park and it has succeeded.

Several in favor of the park said that it would be a good source of employment for teenagers and it would show that the city is a progressive community. Guy Gsell, executive producer, of Field Station: Dinosaurs in New Jersey, said after the hearing that he was pleased with the way it went.

“I liked all the back and forth,” he said.

While the sentiment was split, he respected the different opinions and said he hoped he “won some people” over to being in favor of the development. Gsell made a presentation on the park and answered questions from the council. One of the problems Gsell faced, he said, is that people didn’t know what the park is all about, which is an educational resource aimed at families with children between 3 and 11.

It’s not something that would appeal to teenagers, he said, but it would be a place where they could work at. Dinosaurs have a great deal of appeal to children, he said, because they actually lived on Earth.

While children quickly realize figures such as Santa Claus and the Easter bunny are not real, dinosaurs were, and they find that attractive, he said.

Rick Worner, managing partner of Derby Destination Development LLC, the entity developing the project, said he was pleased with the hearing and looked forward to the vote at month’s end.

In a surprise move, an announcement was made in the second part of Tuesday’s meeting that a major development, Rock Regional Hospital, was planned in the proposed STAR bond district.

The hospital would be a $40 million center with 125 employees, said Mike Belew, executive vice president of development for CarrBaierCrandall Real Estate Group. Belew said the project would be under a “pretty aggressive” timing by breaking ground this year with a planned 2018 opening.

The hospital would be a full-service facility being able to handle about 90 percent of all health care cases, he said. There had been plans for a speciality health care facility in the STAR bond district, but this new, bigger plan, caught the council off guard.

“I think we’re a little shocked,” said Mayor Randy White, “but maybe in a good way.”

Belew said it’s unknown if the project would take place if the STAR bonds were not approved.