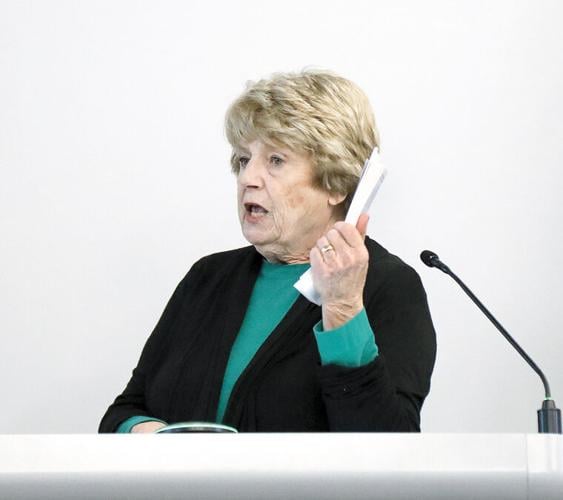 Claudia Peebler (shown) and Cheryl Bannon recently addressed the BOE with concerns over recent rulings of the Review Committee. 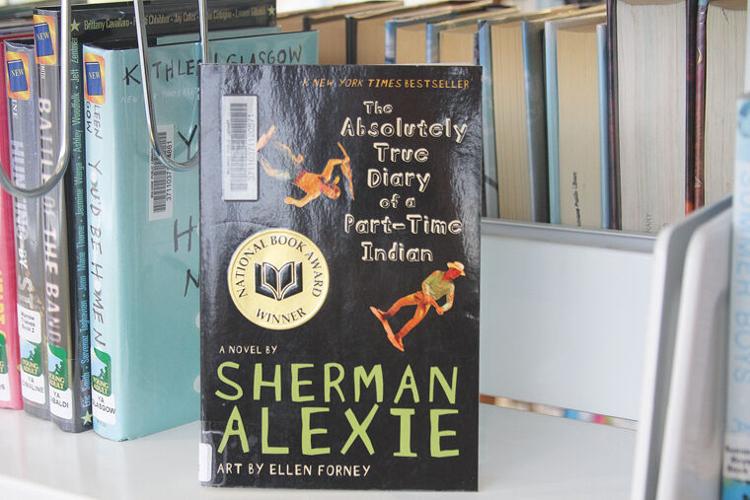 Sherman Alexie’s “The Absolutely True Diary of a Part-Time Indian” was at the center of public discussion during the two most recent Derby school board meetings.

Over the course of its past two meetings, the Derby Board of Education has heard from concerned citizens in regards to recent challenges brought before the USD 260 Review Committee.

Former Derby City Council member Cheryl Bannon and Claudia Peebler, addressing the school board just two weeks apart, both issued statements noting they were worried about the message recent actions from the committee could send.

The concerns were raised in regards to two challenges the committee reviewed within the first quarter of 2022. The two books in question, challenged by a parent and grandparent within the district, were “We Are Not From Here” and “The Absolutely True Diary of a Part-Time Indian.”

Assistant Superintendent of Curriculum and Instruction Dr. Holly Putnam-Jackson noted that “We Are Not From Here” was initially donated through a grant to a specific teacher. While the committee recommended a parental opt-in form to teach the book, the teacher who received the grant is leaving the district at the end of the school year and will be taking the book with them.

Regarding “The Absolutely True Diary of a Part-Time Indian” by Sherman Alexie, the committee’s recommendation was it be removed from the teacher’s selected curriculum list as a whole class read and placed in the Derby High School library instead. Two copies of the book in one of the middle schools were also moved to the high school library.

Both Bannon and Peebler, each having grandchildren of their own in the Derby school district, voiced concerns of censorship relating to the action taken to address “The Absolutely True Diary of a Part-Time Indian.”

“Do not dumb down our children. This is a slippery slope you are starting down,” Bannon said. “Derby is better than this; Derby faculty and students deserve better than this.”

“I want to let you know that I strenuously object to the removal of the book ‘The Absolute Diary of a Part-Time Indian’ from the curriculum,” Peebler said. “Removing this book from the curriculum is censorship as sure as I stand here. You can call it anything you want, but make no mistake, when you allow one person representing one family to dictate what is available to the entire population of Derby High School in spite of accommodations made for that student by the classroom teacher that is blatant censorship and a banning.”

Alexie’s book is featured on the American Library Association’s top 100 banned and challenged books of the past decade, as is the Bible – with Bannon bringing both before the commission for comparison.

Pointing out the mature themes (death, bullying, racism, etc.) in Alexie’s book, Bannon questioned why similar action would not be taken for the Bible – which features murder, rape and genocide, among other mature topics. In fact, Bannon officially submitted her own challenge on the Bible, which will come before the Review Committee on March 25.

The Bible was also the topic of the only other challenge in the committee’s history that Putnam-Jackson could recall. The committee ruled then that donated Bibles could be put into the religious books sections in elementary libraries and held for checkout.

In a separate agenda item at the meeting where Bannon spoke, Putnam-Jackson clarified the process the Review Committee follows, noting it starts with a complaint being filed, which is asked to be submitted at the local level.

“We prefer that goes directly to the teacher or the administrator of the school so they have the opportunity to explain their reasoning for selecting the book and the skills and standards they are utilizing the book to teach, as well as some of the lessons and content,” Putnam-Jackson said.

Additionally, as an initial measure, if a parent disagrees with a book being taught an alternative assignment can be requested. That was the case recently in regards to “Romeo and Juliet,” where a recent suicide attempt in the family led a parent to request an alternate read.

“That would be a reason that we would provide an alternative assignment is the parent is taking care, paying attention and then determining that this book may not be the best thing for their child at that time,” Putnam-Jackson said.

Parents or family members can complete a request for review form on the district website (https://derbyschools.com/district/departments/curriculum/review_committee) and the Review Committee will then be convened to hold a hearing and make recommendations – typically within a 30-day period.

Robyn Pearman, BOE and Review Committee member, noted that the latter group had good communication on the Alexie book before a ruling was made and stated that the committee is not trying to ban books.

Any action recommended by the committee often addresses the book as it applies to the current curriculum, according to Putnam-Jackson. Any additional measures (applying mature ratings, creating district-wide opt-in policies, etc.) would have to go through a secondary vetting process before action could be taken, wanting to implement the most fair ruling possible.

“Our job as a district is to hear everyone’s side and then help the committee reach a consensus,” Putnam-Jackson said. “We try to absolutely honor everyone’s judgement and their voices, and then make the decision that’s best for the students based upon what we know.”