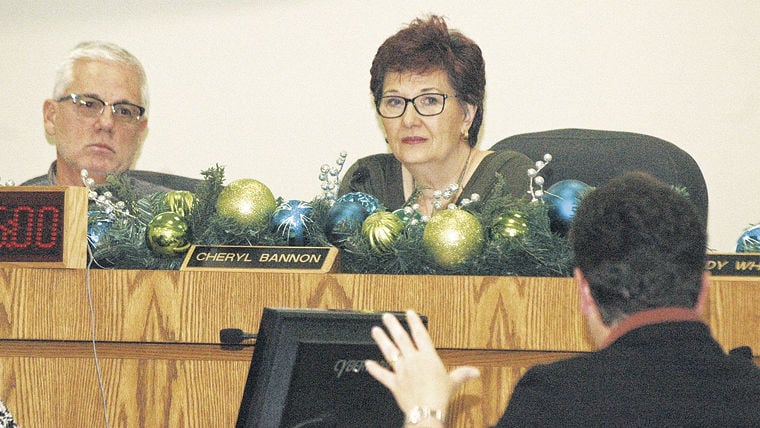 City manager Kathy Sexton explains details about the planned dog park to City Council members John McIntosh and Cheryl Bannon. In approving the plan for Decarsky Park, the council directed architects and staff to make the dog park larger. A preliminary assessment of that design progress is scheduled for the Dec. 12 council meeting. 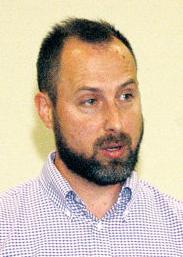 When Derby’s dogs – and their owners – take to the new dog park at the pending Decarsky Park, they’ll have more space to play than originally planned.

Increasing the size of the dog park was the main change made by the City Council after it reviewed the draft Decarsky Park master plan at its Nov. 28 meeting.

“I’m getting a lot of people talking about how small this dog park is,” member Cheryl Bannon said of the dog area, which is on the east end of the park. “Why don’t we just build it bigger now?”

In her experience, Bannon said it’s easier to build something bigger to start with rather than go back and try to increase the size later.

With that direction, architects and staff are working on creating a bigger park this week and will report back to the council at its Dec. 12 meeting with a preliminary assessment of progress.

There’s no set new size, other than it will be bigger.

Designers say they were working within the budget framework when they came up with the initial park size, which was a 44,400-square-foot dog park divided into three separate fenced yards.

Officials say the separate spaces will be for small and big dogs and the third space will be rotated as needed in order to preserve the grass.

“You don’t want to get a muddy yard and have to shut it down for half the season,” said Nick Staib, landscape architect and project manager from the firm of PEC and who made the presentation to the council.

However, member Jack Hezlep said he wasn’t too concerned about the size because in his experience most dogs congregate in one corner of a park and don’t run its full length. Nonetheless, he went along with the majority and approved the plan with a larger dog park.

The park also will have a pond that can be used for water training and a play area along with a watering station where dogs can be hosed off. An agility course feature also is being looked at.

Other details about the park, which is on the southeast side of Derby, were reviewed at the meeting.

• Three 230-foot ballfields designed for girls’ and women’s softball and youth baseball 11 years old and under.

• Three 250-foot ballfields designed for girls’ and women’s softball and youth baseball 12 years old and under.

• Two baseball fields designed for use by 13 years old and up to include adult play.

• Two concession and restroom facilities, batting cages, an open shelter, shade for spectators, green space for warming up for games and to wait between games.

Among the details Staib stressed is that there will be buffering on the north side so the residential community is shielded as much as possible from noise and light. On the subject of lighting, Staib said there’s been vast improvements in technology so that it now doesn’t spill over to areas outside the park.

“We’re not lighting up people’s backyards anymore,” he said.

There also are a lot of details at the park that are being implement to create “that family atmosphere,” he said. They includes lower sinks and toilets in the restrooms so children can use them with ease.

As planned, the park will be constructed in two phases. Phase 1, which will be about 23 acres, will likely cost about $6 million and would be bid in two stages:

• Phase 1A would be mass grading, water and sewer lines, and stormwater detention for construction in summer 2018.

• Phase 1B would be the dog park, three ballfields, concrete and asphalt work such as the parking lot, collector street and traffic signal, sidewalk and a small concession and restroom building. Construction would follow completion of Phase 1A and could occur in fall 2018.