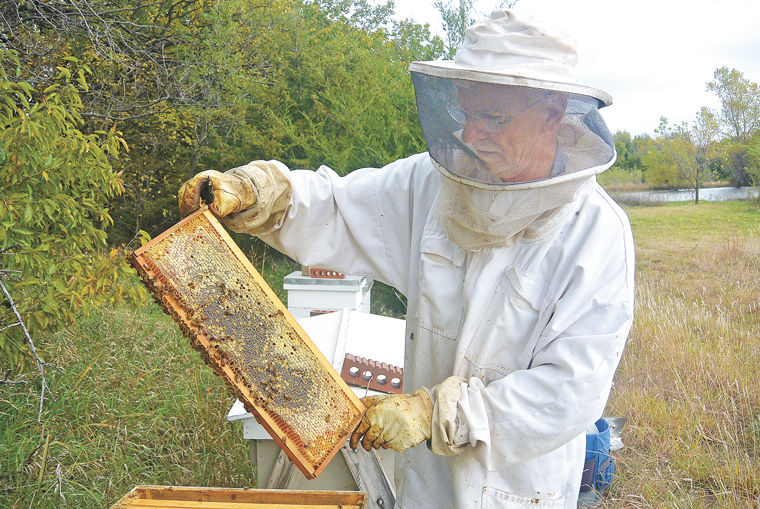 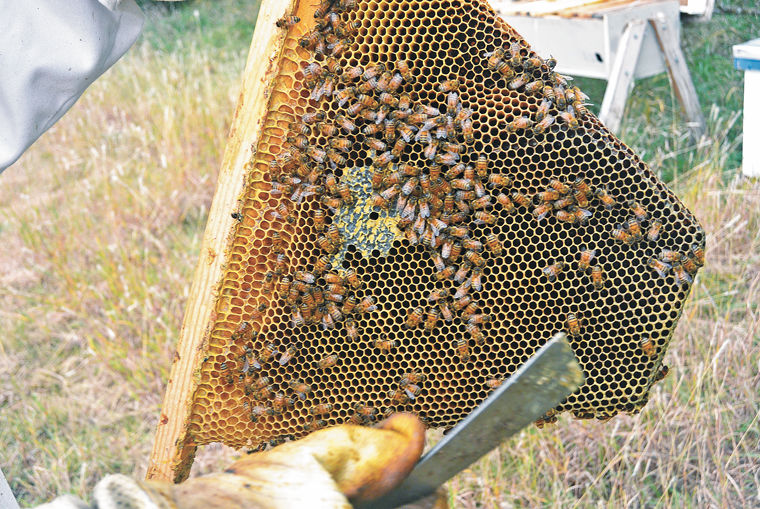 Richard Abel scrapes a handful of bees into a mason jar with powdered sugar to test for varroa mites. In the ’90s, the bee industry almost collapsed because of the parasite.

As a little boy growing up in Mississippi, Richard Abel remembers the strong smell of the dark honey that his uncle stole from wild beehives.

From far away Abel watched his uncle capture the honey in his makeshift bee suit that consisted of two or three shirts, a couple of overalls, and a helmet made of a window screen, a wooden box and a flower sack. He looked like a character from a scary movie, said Abel.

Abel followed his uncle from tree to tree, carrying the bucket of stolen honey, giddy with excitement that his uncle let him come.

“I’ve been fascinated by bees probably all my life,” said Abel.

Abel inherited his uncle’s love of honeybees – but not his uncle’s peculiar bee suit. Nowadays, bees can no longer survive on their own and many times have to rely on beekeepers.

Abel has raised bees in and around Derby for the past 10 years.

He retired from Boeing as a manager for the computing department, but keeping bees has turned into a job within itself.

“It’s much harder to keep bees now than it used to be,” said Abel.

But the impact the pollinators have on human food supply gives Abel the motivation he needs.

About 70 percent of crops require pollination and account for an estimated one trillion dollars in annual sales according to Endangered Species International. Broccoli, blueberries, cherries, apples and cucumbers are a few of the crops that rely on pollination.

The back of Abel’s truck is full of supplies he uses for beekeeping. A couple dozen stragglers that followed him home from their hives buzz around the truck, feeding on the leftover honey.

Abel and his wife sat at their kitchen table drinking coffee when they heard a familiar sound in the kitchen. “That’s one of my girls,” said Abel.

A honeybee had found its way into the house. The couple continued to drink their coffee, aloof to the buzzing overhead.

“We just find them so fascinating,” said Abel.

The couple would sit with a cup of coffee and watch the bees work in the garden when he first started keeping bees.

Abel raised heirloom watermelons, and one spring he had to pollinate his flowers with a paintbrush because there were no pollinators.

“I got some bees, and I had the best garden I ever had,” said Abel. “But they took over and now I don’t have time to garden. I’m too busy taking care of the bees.”

Beekeeping takes patience because of regulations, the decline in colonies and the public’s ignorance about the insects.

Little by little, Abel is working to break down the barriers.

“The regulations for keeping bees are really confusing,” said Abel. “They are not consistent at all across the townships in Kansas. Wichita has no regulations at all. You can have as many bees as you can put in your backyard.”

Greg Swob, president of Kansas Honey Producers, said that the organization is working on model ordinances that communities can adopt to make regulations more consistent across the state.

Abel said that having one beehive doesn’t make sense. If that hive has a high population of varroa mites, a parasite, he takes the healthy bees out of the infested hive and eggs out of a healthy hive so some bees have a chance at surviving. Beekeepers that only have one hive don’t have this option. All their bees will eventually die.

Abel has been asked to take the problem up with the city council, but he doesn’t think they will be receptive to the idea.

“I’m not much of a politician,” said Abel.

Cities like San Francisco and New York raise beehives on top of high-rise buildings. Abel said bees sometimes do better in a city than in the country because there are fewer pesticides and more flowers.

“There’s not as much to eat in the country as there used to be for the bees,” said Abel.

The problem with pesticides

In September, the U.S. added the first seven species of bees from Hawaii to the Endangered Species List according to an article by Pacific Standard. Global bee populations have declined over the years due to what researchers call colony collapse disorder.

Sharon Dobesh, a representative from K-State’s entomology department, said that although Kansas is not designated as one of the places with the disorder, she has seen a decline of 30-40 percent of hives across the state over the winter and summer.

The direct cause of the disorder is still unknown, but many beekeepers blame pesticides and the varroa mite.

“Pesticides are everywhere,” said Abel. “Go to a big box store and walk down the garden aisle – there are enough pesticides to kill everybody in Derby.”

The chemical age began after World War II. Soldiers used the now banned chemical DDT to kill mosquitos and fleas. Everyone started using it after the war, especially farmers.

Abel grew up on a cotton farm. Before his grandfather used pesticides, he would pay Abel a penny for every bollworm he picked off of the plants in his cotton field.

“When pesticides came along, we could spray that on the plant and make more money,” said Abel… “To our defense, when our family started that we didn’t know any better.”

He said two of the worst pesticides are Sevin and neonicotinoids. Sevin contains carbaryl, one of the three most commonly used insecticides in the United States according to The Journal of Pesticide Reform.

When bees come in contact with the chemical, they lose normal muscle control and die. A dose of about 18 grams of carbaryl is fatal for a human that weighs less than 154 pounds.

Several European countries banned the use of some neonics because of their affect on bees.

Beekeepers don’t have the time or money to go up against the big chemical companies, said Abel.

In the ’90s, the bee industry almost collapsed because of the varroa mite, a parasite from Central Asia.

“Bees in America don’t have any defenses because they had never seen a varroa mite before,” said Abel.

The mites killed most of the wild bees. Now, 90 percent of bees will die without a beekeeper to control the mites.

The mites are impossible to see with the naked eye. They look like little ticks, and they burrow inside a cell and suck the blood of baby larvae.

Some beekeepers responded by putting poison strips in the hive to kill the mites, but the survivors adapted so beekeepers resorted to stronger poisons. The wax in the beehive absorbs the toxins and the baby bees grow up in a toxic environment, which decreases their lifespan, said Abel.

Abel uses powdered sugar to check for mites. He scrapes a handful of bees into a mason jar with powdered sugar. The powdered sugar separates the little black parasites from the bees. Besides being a little confused, the sugar has no harmful effect on the bees.

“We can’t get rid of the mites, but bees may be able to develop some coexisting behaviors so they can survive along with the mites,” said Abel.

Residents of Derby can call Abel to remove swarms in the area. One day, Abel arrived at a house to find the man who called peeking out his window, terrified of the bees huddled in a tree outside his home.

“The only time a bee stings is if you’re invading its home,” said Abel. “They are going to protect their food and their babies.”

When a bee stings, it dies.

“They are not out to commit suicide,” said Abel.

One time Abel was called to a private school where a swarm was caught in a chain-link fence. Children from the school came out to watch him remove the bees, and Abel used the opportunity to teach students about the importance of bees.

“Kids are fun and fearless,” said Abel. “They haven’t been brainwashed yet that bees are something you ought to be afraid of.”

Abel said everyone thinks they are allergic to bees when actually only 2-3 percent of the population is allergic.

“I think all those people in the country live in Wichita,” said Abel. “Everybody that calls me is allergic.”

“We have had a huge increase in beekeepers in Kansas in the last few years,” said Dobesh. She said people are connecting more with nature and taking action, but beekeeping is not the only way to help the bees.

Abel encourages people to stop using pesticides or artificial fertilizers and to refrain from spraying every bug that flies by.

Abel and his wife have a bottomless supply of honey that they give away to neighbors and friends. What started as a hobby has developed into a relationship between Abel and the bees.