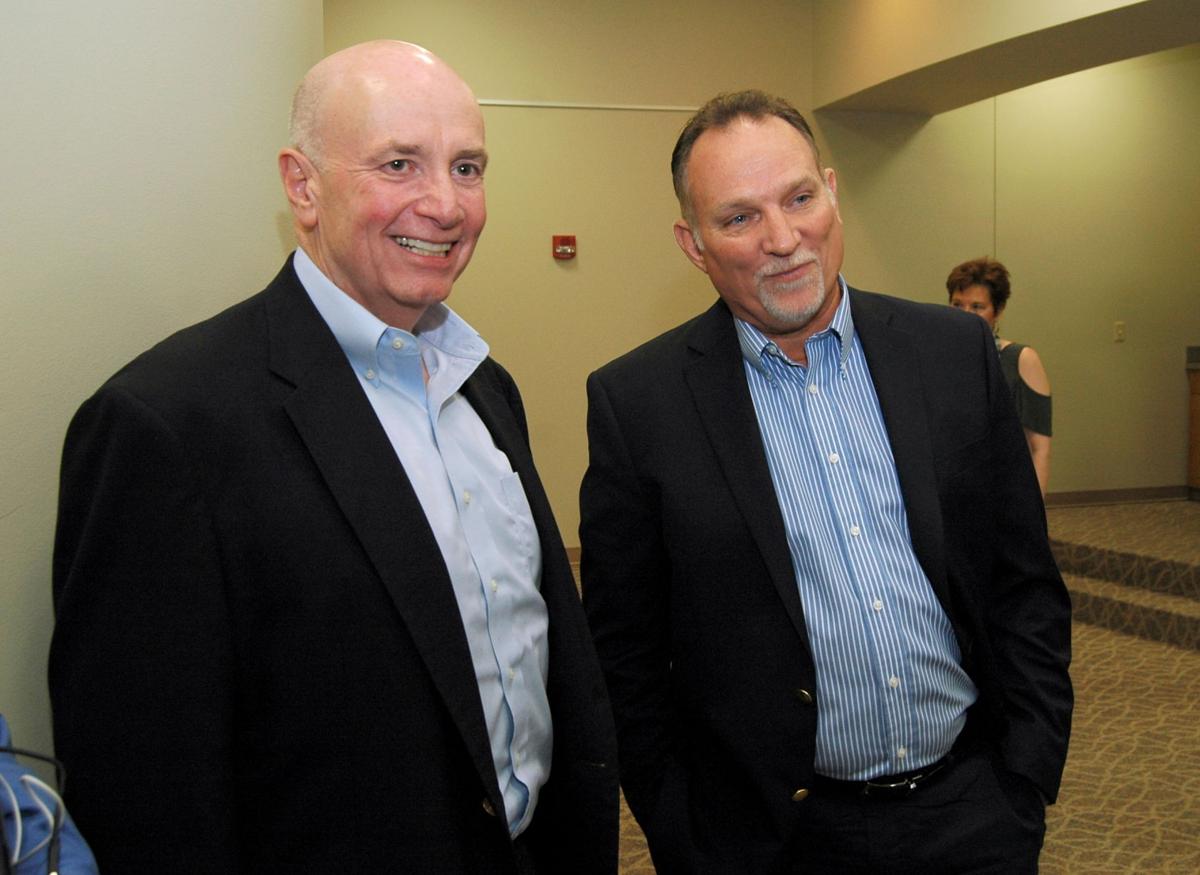 Developer Rick Worner, left, and Derby Mayor Randy White visit after the vote. The agreement covers the STAR bond district, which will include a visitor attraction known as Field Station: Dinosaurs, along with commercial developments, such as a hotel and restaurants. 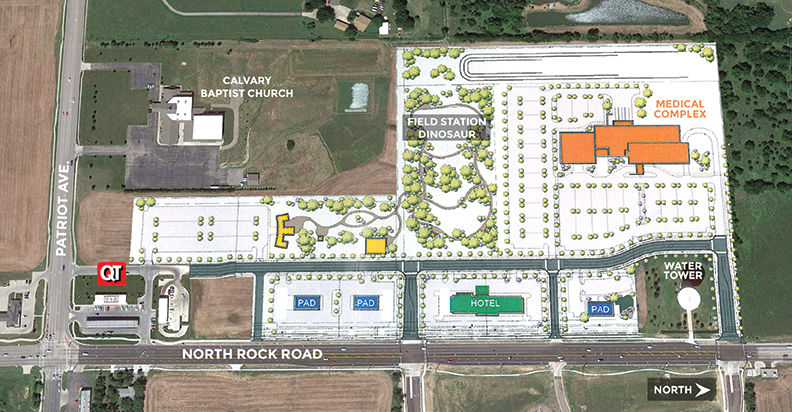 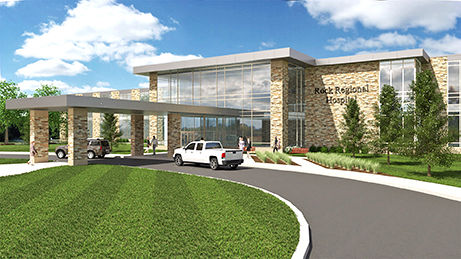 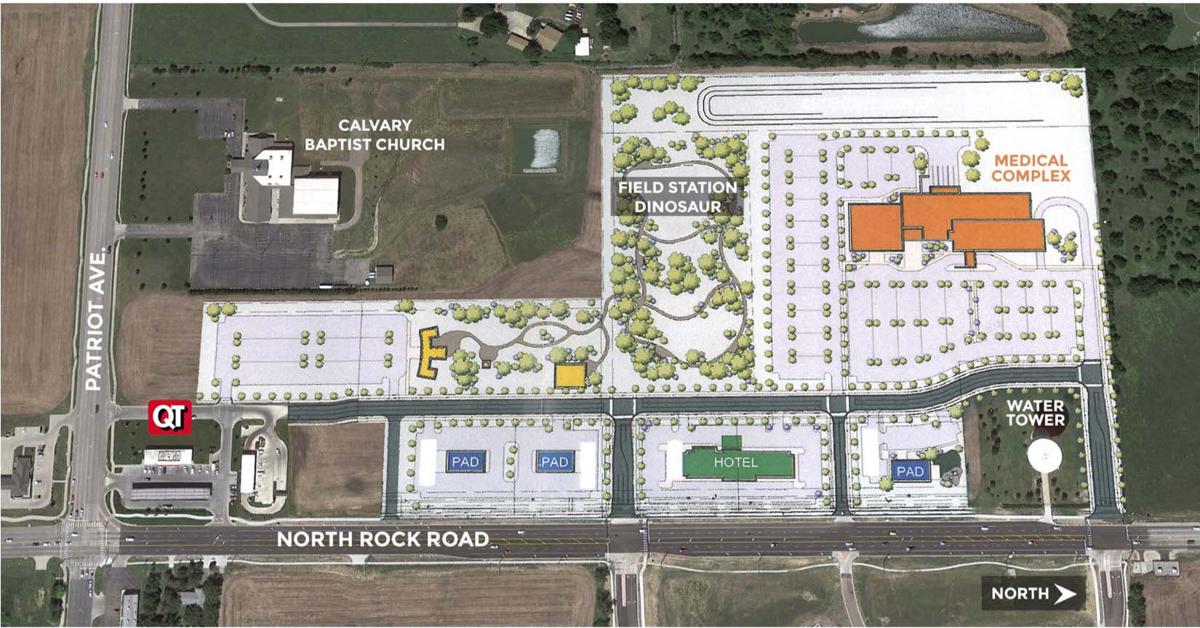 Developer Rick Worner, left, and Derby Mayor Randy White visit after the vote. The agreement covers the STAR bond district, which will include a visitor attraction known as Field Station: Dinosaurs, along with commercial developments, such as a hotel and restaurants.

Derby’s dinosaur park has been approved.

The Derby City Council passed, by a 7-1 vote, a development agreement for the long-discussed concept along with the STAR bond district necessary for its creation at the July 26 meeting.

While the vote was necessary for the project to move forward, it doesn’t mean the development is a done deal.

The process now moves on to the state and the Secretary of Commerce, who must give his approval, and then the bonds must be sold to interested investors in order to make the park and related development a reality.

“This is the next step,” said Derby Mayor Randy White after the vote.

So far, the dinosaur concept, known as Field Station: Dinosaurs, has been an 18-month process, and there could be several more years to go in the process.

The concept was put forth by developer Rick Worner, who heads Derby Destination Development LLC.

It also includes a medical facility to be called Rock Regional Hospital. Other site attractions include a theater, miniature golf, a ropes course, and commercial ventures, such as a restaurant, hotel and retail outlets.

The STAR bond district, which makes it eligible to use tax revenue to fund development through bonds, is north of Patriot Avenue and west of Rock Road.

Two weeks ago, there was a lengthy public hearing on the idea, with the 16 speakers split evenly.

At this meeting, there were three speakers, including retired accountant Robert Winn, who continued to question the projected numbers and the procedures used to arrive at the vote.

Another speaker, Kris Lessley, said that although officials have stressed that the city isn’t paying for the park, in the end it’s responsible for it.

Council members listened carefully, but in the end, decided that it was better to give the development a try than not.

“If we don’t develop it, someone else will,” said member Cheryl Bannon.

There is a risk of it failing, and creating a negative image for Derby, but there are no guarantees in life, she said.

“I really think this is a good choice at this time,” she said.

Member Chuck Warren said he had a lot of skepticism of the project, but it is something that will make Derby better.

The sole member to vote against it, Vaughn Nun, said he was reflecting the will of the dissenting residents. He had taken into account citizens who had concerns and wanted to make sure their concerns were reflected in the final vote.

“It’s not bad to be skeptical,” he said.

However, had two others joined him, the proposal would have died. That’s because it required a two-thirds majority vote as opposed to a simple majority.

There were concerns voiced previously about what would happen to the property if the park failed, but new language was written into the agreement that would require a new operator to run the park.

If that didn’t work, the signs would be required to be removed and the property secured and maintained in order that it not turn into an eyesore.

Also, the hotel and restaurant planned for the site will need to be approved by city officials.