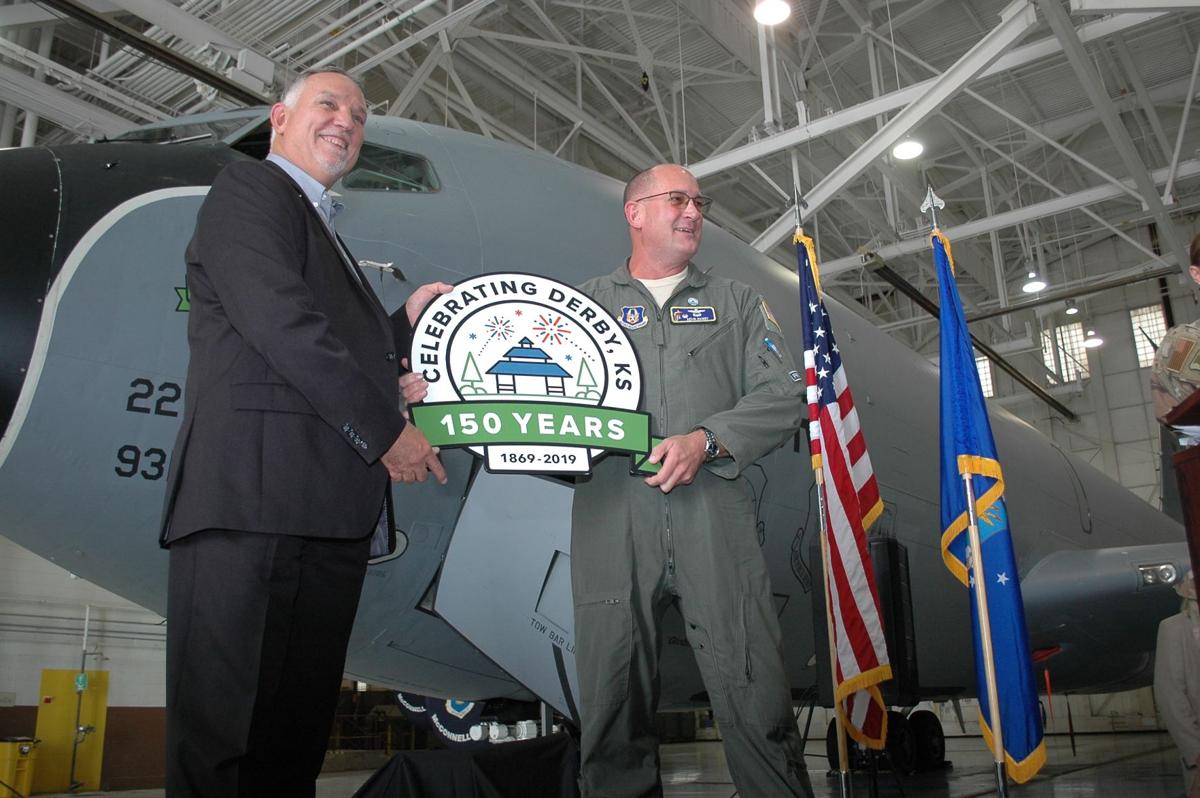 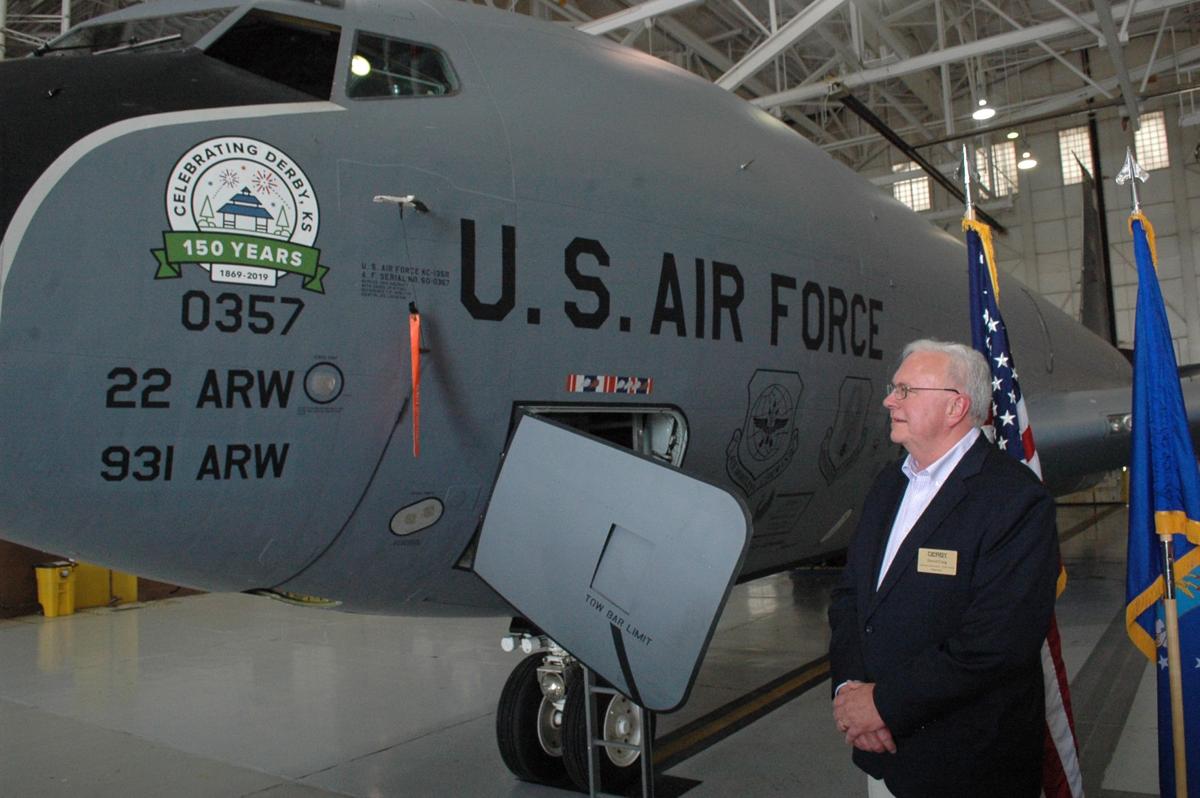 David Craig views the Derby logo nose art on an aircraft he flew on back in the 1970s. It’s something he never expected to see. “It’s beautiful,” he says. “This is a special occasion.”

One of the KC-135 air refueling planes at McConnell Air Force Base has a piece of Derby attached to it – literally.

In what is termed a nose-art ceremony, the city’s official 150th anniversary logo was unveiled on the pilot’s side of the aircraft at the base on Oct. 2 in front of an appreciative crowd of U.S. Air Force, Derby and elected officials.

The audience also included David Craig. And for the Derby resident, the ceremony had an extra special meaning as he was a crew member who flew on this very same aircraft back in 1978, a plane with tail number 357 that he called “an old friend.”

“It’s beautiful,” Craig said. “This is a special occasion.”

He realized it took a lot of effort to get the approval necessary for the artwork to be put on the plane — but it was worth it.

“It’s just an amazing feeling; it really warms my heart,” Craig said. “It’s very personal as I never would have expected in 1978 I would be here in Kansas in 2019 seeing my new hometown logo being put on the plane.”

Derby Mayor Randy White repeatedly stated that this is “a big deal,” to the point he joked about asking people how many times he was going to say that.

Recognition in a special way

But it was, he said, and it was all about building a firm, neighborly relationship.

White also brought the crowd up to speed on the history of Derby, including several colorful stories, such as women busting up a saloon and a 1920s bank robbery going bad.

“We have grown a lot from those early days,” White said.

He cited the city’s schools, library, parks and first responders. He also referenced DHS’s AFROTC group and its many activities.

And so, a celebration was in order for the 150th, White said.

“We wanted to have special events throughout the entire year,” he said. “We didn’t want just one.”

Therefore, this nose art ceremony was one of many and it was even more special by knowing it doesn’t happen often, he said.

“It’s obvious Team McConnell wanted to recognize us in a special way,” White said shortly before a black cloth was dropped, revealing the logo.

Of about 125,000 U.S. bomber airmen, more than 57,000 were killed in action. Since they knew odds were against them, anything to cheer them up was warranted, he said.

Partnership between city, base

The crews often developed strong bonds with the planes they were flying, and some believed that the nose art was bringing luck to the planes.

They had some official rules about what could be on the nose, but given the deadly nature of the war, nobody cared about them.

The point was to get people to have fun, think about home, and think about peace, Tanner said. Today, although the toll isn’t like it was in the 1940s, planes and crews still get put in harm’s way and no one should forget that, he said.

City Council member Jack Hezlep has experience with nose art as he flew F-4s for the U.S. Navy during the Vietnam War. Although the practice was mostly an Air Force one, the Navy has its share, mostly with “big teeth,” he said.

“Individual Navy nose art was once in a blue moon,” he said.

This particular application got his approval.

U.S. Rep. Ron Estes said the occasion was reflective of “the great partnership between McConnell and the city of Derby.”

Estes said that this was a new event for him.