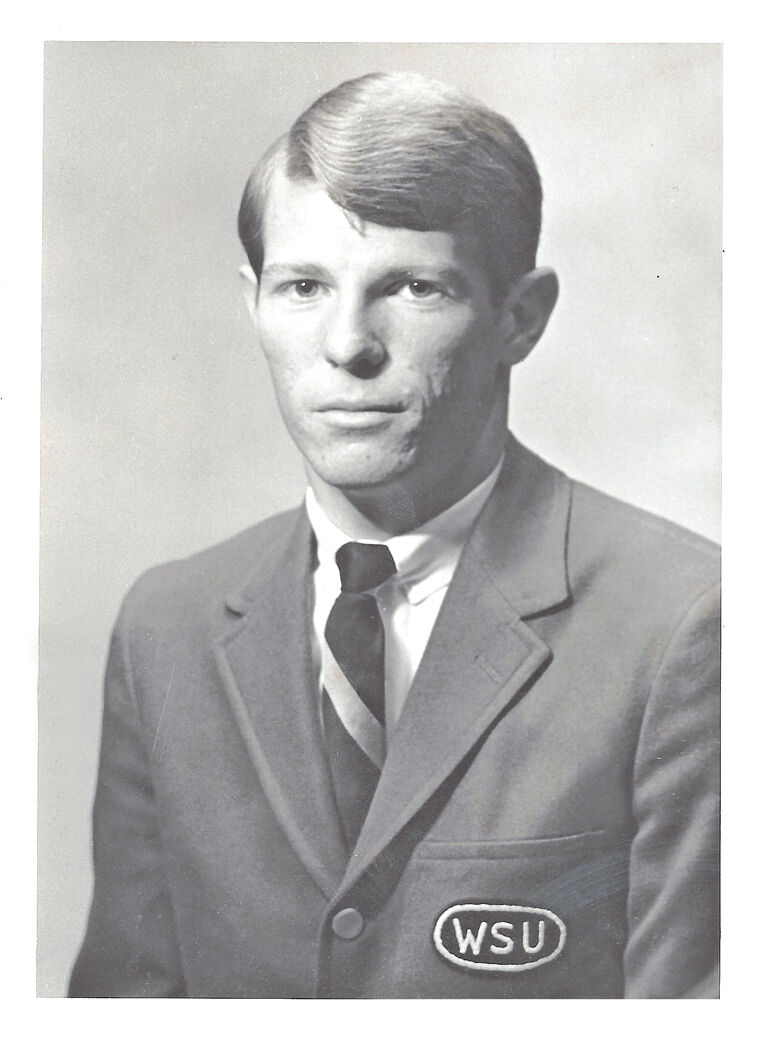 Rex Schott is pictured in his first official photo as Wichita State head athletic trainer. He was hired in the months following the Wichita State plane crash in Oct. 1970. 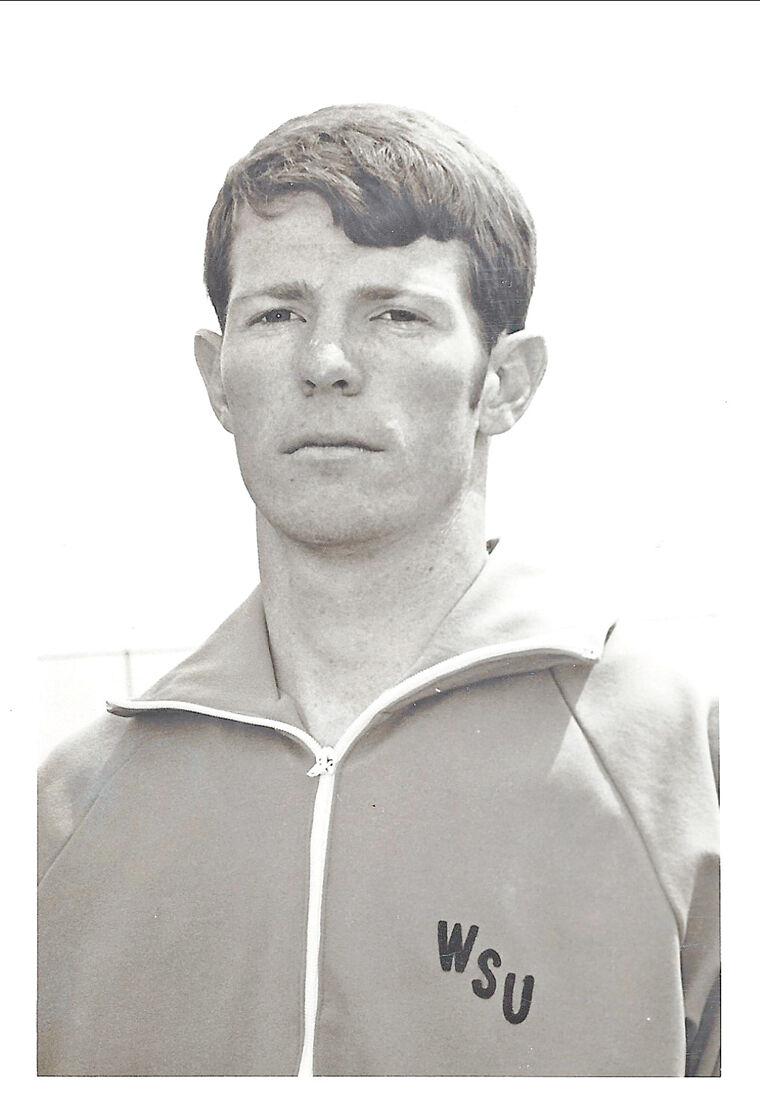 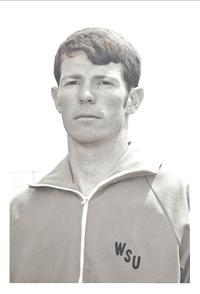 Schott spent two years with WSU track and field and finished third in long jump at the MVC Championships as a senior.

Rex Schott is pictured in his first official photo as Wichita State head athletic trainer. He was hired in the months following the Wichita State plane crash in Oct. 1970.

Schott spent two years with WSU track and field and finished third in long jump at the MVC Championships as a senior.

This is part one of a two-part series on longtime Derby High School athletic trainer, Rex Schott.

Rex Schott’s assignment to Fort Polk, La., was nothing more than his part of serving in the Army Reserves. It came with expectations and his responsibilities in active duty. His life and career, however, endured a seismic shift that fall day.

“Hey, didn’t you work with the Wichita State football team?”

The question came from a member of Schott’s unit after hearing about a plane crash on the radio. He soon called home, asking his wife questions about who was on board between friends and family.

While he is trying to connect with local sources, he's also balancing the realization that he would have likely been on one of the two planes had he not be in active duty.

Schott wasn’t going to give up his military career, but that day opened the door to a new call to “service.”

Early years as an athlete

Schott wanted to wear Derby green as a running back in the fall of 1961. However, he hurt his knee while practicing and that put a damper on his pursuits. Derby coach Jack Hayes, who coincidentally played football at Wichita State, told him, “Hey, you like being around sports, why don’t you hang around and be our manager and trainer?”

Thanks to a student test inside a mailer from the Cramer Chemical Company, Schott earned a “Cramer First Aider Student Trainer” badge that could be sewn on his shirt.

He began visiting Cramer clinics in the summer, learning further how to tape and deal with athletes. Schott didn’t do sports as a sophomore or junior at Derby, but Hayes took him to meet Wichita State athletic trainer Tom Reeves.

Reeves offered to hire Schott after he graduated from Derby and that’s exactly what transpired after enrolling at Wichita State and preparing to participate in track and field.

As an unpaid, 18-year-old kid, Schott became the sole trainer for the freshman football team for the Shockers. He’d work with roughly 60 players ahead of practices, providing Schott with an environment that felt more like a baptism by fire at times.

He’d even tend to athletes in the same sport in which he was a participant.

Schott participated in sprints (9.6, 100-yard dash), relays and the long jump (24-11, PR, third at MVC Championships as a senior) during his freshman and senior year at Wichita State. In between events, he’d tend to his teammates as their athletic trainer.

Schott’s relationship with Reeves, however, came to a sudden and unfortunate halt.

Reeves, Schott’s friend and mentor, was one of the 29 victims in the plane crash. Swisher spoke with Wichita State president Dr. Ted Ahlberg and he informed him that he wanted Schott to interview for the head athletic trainer job during his leave at Christmas in 1970.

At 22 years old, Schott became the youngest athletic trainer at any major institution in the United States.

“He hired me on the spot and said the job is yours,” Schott said. “He said all the coaches want me to do it because I knew the kids. They were all a couple years younger than me [though].”

Schott’s role went far beyond sports medicine. He became a counselor of sorts, helping football players who were present at the crash rehabilitate from physical and emotional scars.

Given that members were back on the field 22 days after the crash occurred, leadership was craved and needed.

While Schott was so close to the athletes in age, former Wichita State football player John Yeros said coaches were not much older either. What the football players and other athletes found in their coaching and training staff was strength, especially at such a trying time.

“We were 18, 19, 20 years old and we had to grow up fast,” Yeros said. “We needed someone to have a voice for us and there were times we’d go to Rex with things we knew we couldn’t go to the coaches with. Sometimes, it had nothing to do with football or an injury. It was someone else who was there who had the ability to listen and get what you needed.”

Call to service in military

After enlisting in the military in March 1970, Schott spent 37 years in the United States Army/Army Reserve.

He was an honor graduate from basic training and drill sergeant school. He was directly promoted to an E-5 (Sergeant) after nine months in active duty. Within five years, he worked his way to E-7 (Sergeant First Class).

How does an aspiring athletic trainer focus on those skills while also working his way up to colonel?

“Honestly, I have no idea how I did it all,” Schott said, chuckling.

Family sacrifices were certainly made along the way, including summer-long deployments through active duty.

“I really enjoyed the military,” Schott said. “I enjoyed the discipline of it and I like being a leader.”

Army leadership saw Schott’s drive for excellence. Beyond the hands-on nature and drive to be with his troops both stateside and overseas, he recalled an ORE (operational readiness evaluation) where his transportation lieutenant colonel would evaluate his battalion to see how effective they were and their readiness for possible deployment.

“‘I don’t know how you do this,’ Schott said of their evaluation. “‘… You guys passed with flying colors and you’re ready to go to war. I don’t know how you guys do it because I’m full time and I can barely keep up.’ I told him, ‘well, you just do what you’ve got to do.’”

At the same time, he was still sharing time between Wichita State, the military and also signing on to assist with Derby athletic training in 1976.

“We had three, sometimes four students that would help me [with Shocker athletics],” Schott said. “After football was over, I only got to take one with me during basketball … they were just students and I trained them in what they were doing.”

Later on, he began part-time duties helping women’s athletics at Wichita State, serving as a physical therapist’s assistant at Mid-America Center for Sports Medicine and then officially opening his door to Derby.

Even with his workload, there was a calming presence that Schott brought to the table.

Leslie McVay, who is a sister-in-law to former Derby coach Tommy McVay, was also a student trainer and volleyball player at Wichita State.

Schott began driving university vehicles as a senior athlete and McVay recalled the days of him driving teams to and from events in his days as a trainer as well.

“He was very involved and was such an enthusiastic fan,” McVay said. “That was an added pleasure to have Rex around … he’s such a good guy and he showed personal interest in the teams that he took care of.”

That eye left an impression on McVay as well, who is retiring after 23 years as a volleyball coach (22 in track and field) in Edmond Public Schools (Okla.).

“People don’t realize everything [Schott and others] do as trainers,” she said. “… It’s a lot of work and a rigorous job and I commend him for it because he’s awesome at what he does.”

Didn’t leave home to be home: Schott in 44th year with DHS athletics

This is part two of a two-part series on longtime Derby High School coach and athletic trainer, Rex Schott.