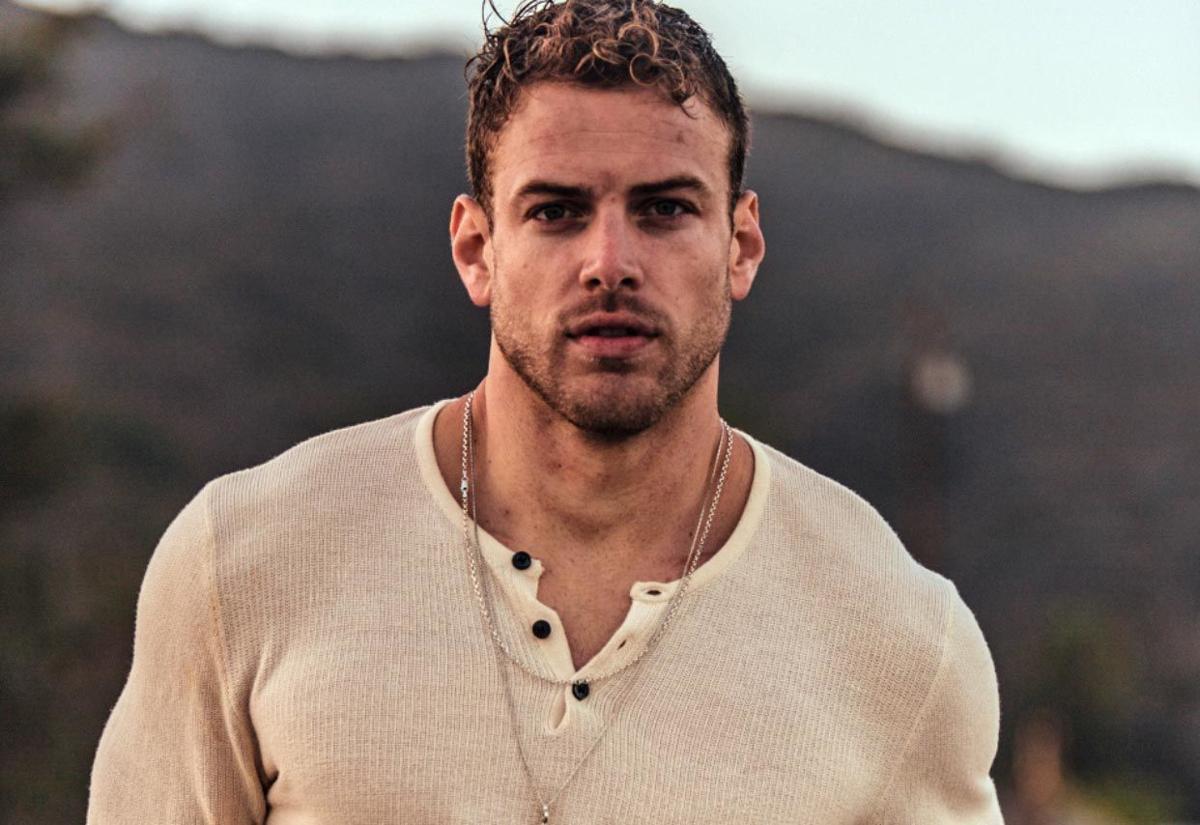 Derby High School graduate Eric Lutz is living and working in Los Angeles and Hollywood in pursuit of his acting and modeling career. 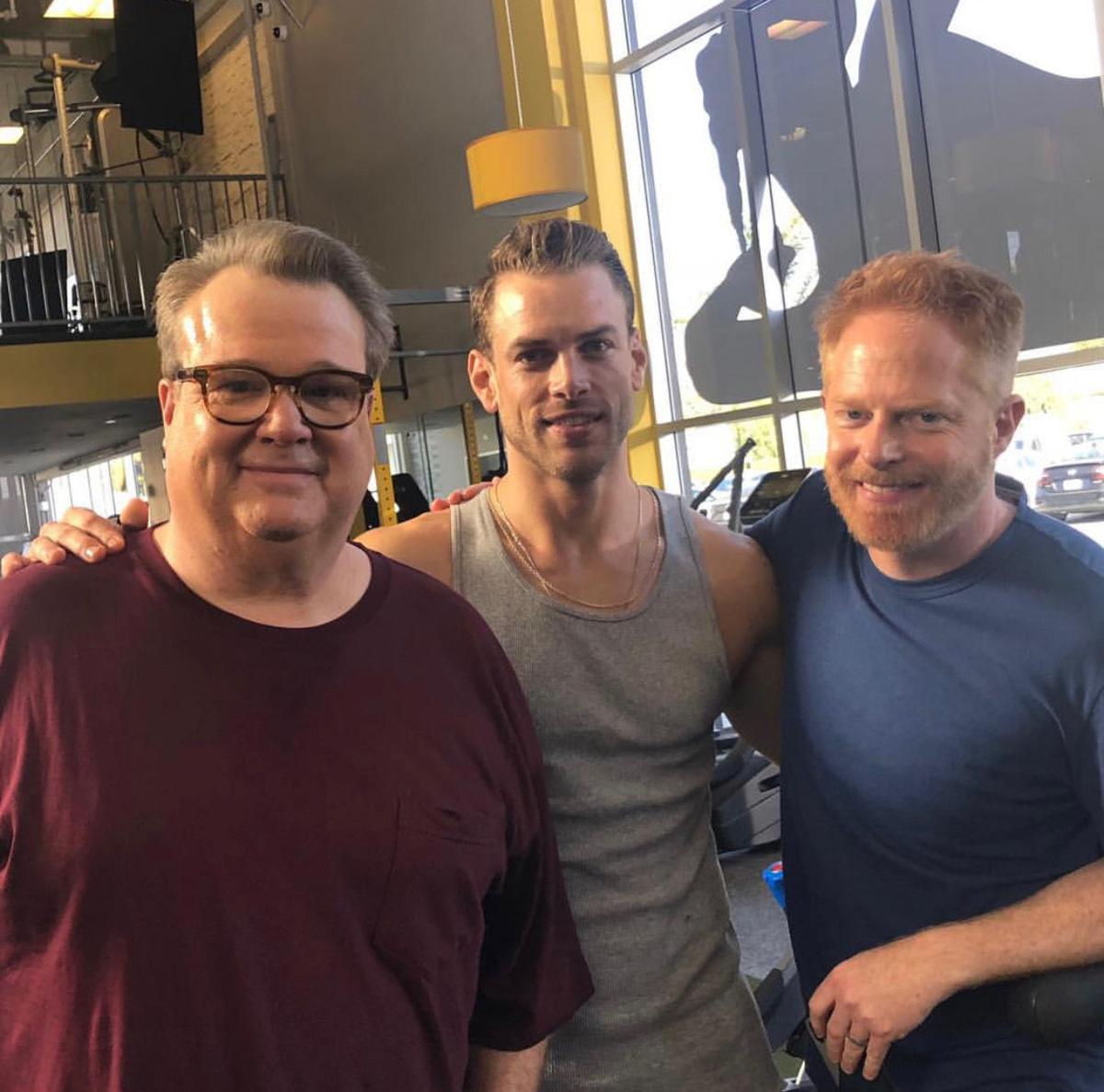 Lutz is joined by Eric Stonestreet (left) and Jesse Tyler Ferguson (right) on the set of Modern Family.

Eric Lutz’s August 2014 drive to California was full of unknowns.

The Derby graduate had left his job in Manhattan, Kan., and after crafting his dreams of being an actor at Kansas State, he made the 20-plus hour drive to Los Angeles to bring his dreams to Hollywood.

With no guarantees of work, it didn’t shake him from the road he knew he needed to take.

“I remember when I first parked in LA, as soon as my feet touched the pavement, I was the most confident I had ever been,” he added.

Growing up in Derby

Lutz and sports were synonymous through his childhood.

Starting in third grade, he took advantage of every sport he could. However, there was still that nook in his mind that wondered what it would take to be an actor.

Football became the core of his athletic pursuits, but a shakeup as a freshman helped him peek through the door of what show biz might look like. He explored theatre, but said he wasn’t confident in what he should do. He decided to get experience in production and lighting.

He rejoined the football team the next year and then took the sport to college. Before beginning his two-year stint at Friends University, Lutz and classmate Riley Hicks were selected to compete on “Are You Smarter Than a 5th Grader?”

The opportunity couldn’t have been timed better for Lutz.

His performance on the show caught the eye of executive producer John Stevens. The show staff contacted schools from where they grew up and he and Hicks were placed in the audition process.

“I was working for Sherwin Williams on Rock Road not knowing how I’d pay for college,” Lutz said. “They reached out and said we’d want to do a Prom King/Queen episode. I thought it was a scam at first, but I got ahold of them and I started doing interviews.”

Soon after the show taping, Stevens told Lutz that he wanted to offer him an internship after he had gotten his college degree.

“The best thing he said to me was that I had to graduate college first,” he said. “If the pace was going to be too fast or it was something I didn’t like, I had something to fall back on. He was very smart.”

It also showed Lutz the road to a career that he felt was attainable.

Deciding whether or not he wanted to attend Kansas State or Oklahoma State, he spent one year at Wichita State in pursuit of a kinesiology degree.

Lutz considered an open tryout to play football for the Wildcats, but instead, he saw his performance career take shape.

Looking to fill out his class schedule and seeing what classes were available, he started atop the course guide and caught himself looking closely at acting. He filled his courses and soon after a role in “The Music Man” was delivered.

“My first thing after leaving 60 people on the football field was to join 60 people on stage,” he said. “It was a big production. They made a big part for me and it was fun. Everyone was really inviting and welcoming. I had no idea what I was doing, but I enjoyed it.”

“In college I started getting a lot of lead roles,” Lutz said. “My acting coaches had all taken the route and been to LA and performed in different places like Chicago and Los Angeles. They were really good at what they did and were really pushing me to do it.”

He also had a part in “Cat on a Hot Tin Roof” and “Columbinus” while at Kansas State.

Moving to the ‘City of Angels’

Could the kid from Derby, Kan., really do it?

Lutz found himself pondering that question, and as soon as his acting coaches/professors saw him in Manhattan after graduation, they didn’t leave any room for doubt.

“They’d get on me and ask me what I was still doing in town,” he said. “They told me not to get stuck and that I needed to move there. They knew it’s easy to get comfortable. Their thing was, ‘we love you, don’t be scared. Just go.’”

Lutz made the trek back to Derby, packed his car and made the cross-country trip.

Knowing too that the move didn’t offer certainty of a career, his parents made the promise that they’d be ready to take him in if it didn’t work.

It’s been anything but that for the 2008 Derby High School graduate.

Soon after arriving in Los Angeles, Lutz got a job at SUR Restaurant & Lounge. It is the home to “Vanderpump Rules” on Bravo. He was also offered a role in that show and “Rich Kids in Beverly Hills,” but turned both offers down.

“People don’t hear ‘no’ a lot,” he said. “[My professors would share], ‘know your worth and remember the good things take time.’”

Lutz’s portfolio also includes a modeling career and he recently signed with Wilhelmina Agency. The company is one of the largest full-service management companies worldwide and has headquarters in Chicago, London, Los Angeles, Miami and New York City. It represents stars such as Demi Lovato, Nicki Minaj and Shawn Mendes. Lutz said he remembers his family would ask him when they’d see him on TV or in movies. He asked for five to 10 years to land a role that he’d be really proud of.

“Saying no [to roles] is what I believe landed me a really big agency,” Lutz said of the deal. “They saw that I’m a guy who’s grounded and knows what he wants … I had big opportunities.

While in pursuit of his Screen Actors Guild-AFTRA card, he signed up for roles that would allow him to achieve membership with the prestigious organization.

Shortly after, he got a call for an extra role in “Modern Family.” The scene was with characters Cameron and Mitch, played by fellow Kansas State graduate Eric Stonestreet and Jesse Tyler Ferguson.

It was a surreal moment for Lutz.

“[My professors] asked me if it was okay for them to reach out to Eric and I said, ‘absolutely, are you kidding me? Please do,’” he said. “It was really cool because they talked to him. They told him a K-Stater booked a role [on the show].”

On set for filming and joined by four additional actors, Stonestreet called out for his fellow graduate.

That relationship helped Lutz land a featured extra role in the 12th episode of season 10.

“The show is [entering its final season] so it’s cool to be on that with him before it was done,” Lutz said. “We talked about the teacher we had in common; it was really fun and it brought back a lot of memories.”

One of Lutz’s biggest opportunities is coming soon, but due to non-disclosure agreements, no official statements can be made.

As offers come and go, the Derby native can’t help but think to his experience at 18 years old on the game show.

“It makes me want to get up in the morning and go,” Lutz said of his career. “Being on [Are You Smarter Than a 5th Grader?] opened the floodgates and helped me see it was possible. I could be the kid from Derby and do it.”