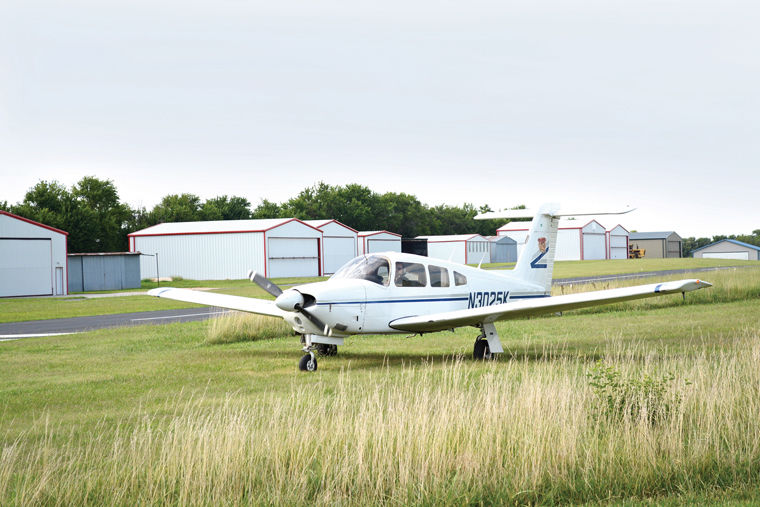 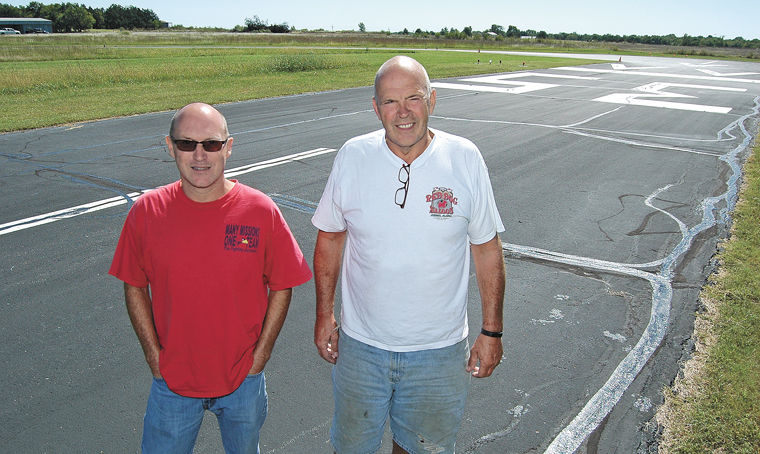 Greg Thomas, left, and Steve Logue, who own and operate Cook Airfield under the operating name Crosswinds Aviation, are continuing to expand the enterprise. More growth will come this year as they work with funding for five new projects.

Greg Thomas, left, and Steve Logue, who own and operate Cook Airfield under the operating name Crosswinds Aviation, are continuing to expand the enterprise. More growth will come this year as they work with funding for five new projects.

Development continues at Cook Airfield, a small airport just east of Derby. The runway has been expanded and now the airfield has been awarded five grants from the Kansas Department of Transportation for $260,940 worth of projects to upgrade it.

Greg Thomas, who owns and operates the airport at 7015 S. 143rd St. E. with his business partner, Steve Logue, under the operating name Crosswinds Aviation, said he’s pleased with the awards.

“It was a surprise to us, but we’re definitely happy to have them,” he said.

He didn’t expect to get all five this year, but having them will really move the airport forward, Thomas said.

The funding won’t come through until the start of the new fiscal year on July 1, and Thomas believes work will start soon afterwards. However, if possible, they’ll get moving with one project, an aeronautical study, before that.

The work will keep them busy.

“We’re trying to wrap up projects from last year and now we have five more,” he said with a laugh.

The lighting upgrade will complete lighting for the airport, Thomas said, and it’s important to have the taxiways lit.

“Planes aren’t like cars,” he said. “A lot of the older planes just have one light off to one side of the wing and they need lighting to get into the fuel pumps.”

The approach path indicator will for aircraft landing in a south-north direction. It’s not an instrument approach, but provides landing guidance, he said. There already is one in place for north-south landings.

The five projects are part of a group of 23 that were selected for Kansas Airport Improvement Program funding for the purpose of planning, constructing or rehabilitating public use general aviation airports.

Officials say the aviation projects address the top 15 percent “most impactful” airport improvements in the state.

Thomas said the airfield is expanding, including five new buildings. There also is housing at the field, where owners can keep planes in hangars onsite and fly as they want. They have nine houses there with 18 lots sold and 12 remaining. Also, more than 50 planes are based at the field.

Thomas said using the KAIP funding makes it simpler as they don’t have to rely on city or county sources.

“You have two guys making decisions and pushing their vision forward versus a whole board arguing over everything all the time,” he said.

The competition to get the money is tough, he said, but the two men were able to justify the work.

KDOT spokeswoman Jeanny Sharp said the investment should not only help the airfield grow, but be good for the area.

As part of the requirements, the airport has to pay 5 percent of the cost for work dealing with engineering, design and studies and 10 percent with construction.

It’s important, Sharp said, that the money is not “just a handout,” and the owners have to invest funds, too.

“Just about everything KDOT is doing you have to have skin in the game,” she said.

Cook Airfield was established in the late 1950s and once served as a reliever facility for Cessna to tie down planes waiting to be ferried around the nation. Crosswinds purchased the field in 2003.