A sign along Rock Road marks the park’s entrance. There are traffic controls at the entrance, but those won’t be turned on until the park is open and in use.

Signs are up, traffic lights are at a new intersection with Rock Road and a peek to the west reveals ball field lights up – and more. So naturally the big question Director of Public Works Robert Mendoza got when he went before the City Council on Jan. 14 for an update on ball field management agreement negotiations for the park was, “When will it open?”

Well, not soon, he answered.

In fact, it almost is certain to be next year, even if it looks ready.

“There will be a time when it looks like nothing is happening,” he said.

However, something important is happening: the grass is taking root. 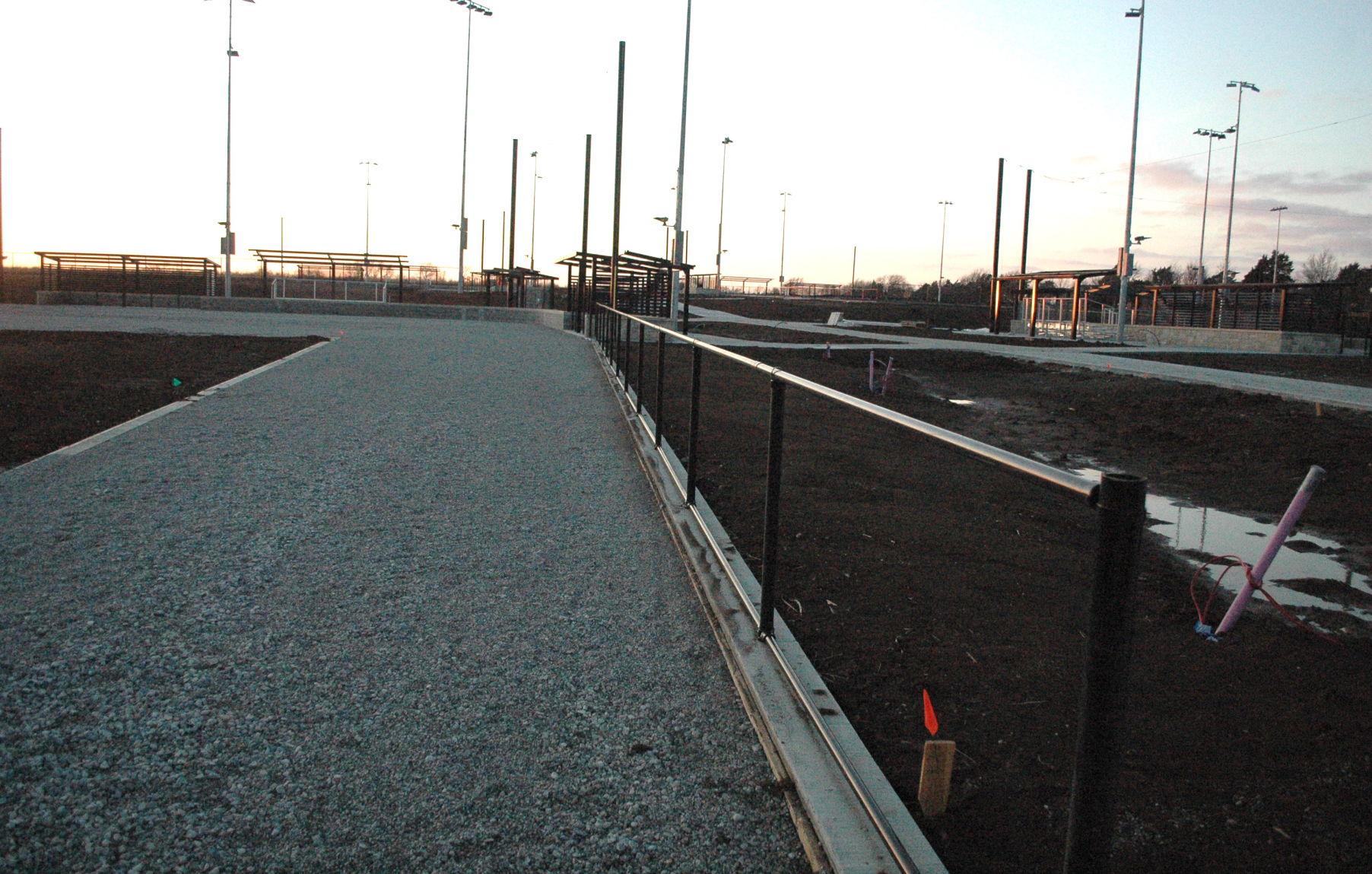 While the infields are artificial turf, the outfields are natural grass and there’s no reason to rush the growth process, he said.

If they did, the fields would not be a field of dreams, but a field of mud – and the whole process set back.

In any case, the complex is not yet ready for organized teams to take to the fields, but it will be in 2021.

Mendoza is pleased about the construction progress, which is moving along quickly.

The lights have been tested, a concession and restrooms building is up and the fields have been laid out. There’s more work to go, but the pace is satisfying, he said.

The much-anticipated dog park will be ready when the park opens, too.

Mendoza expects a big crowd for that facility and said officials want to be able to handle it for the first day and beyond. 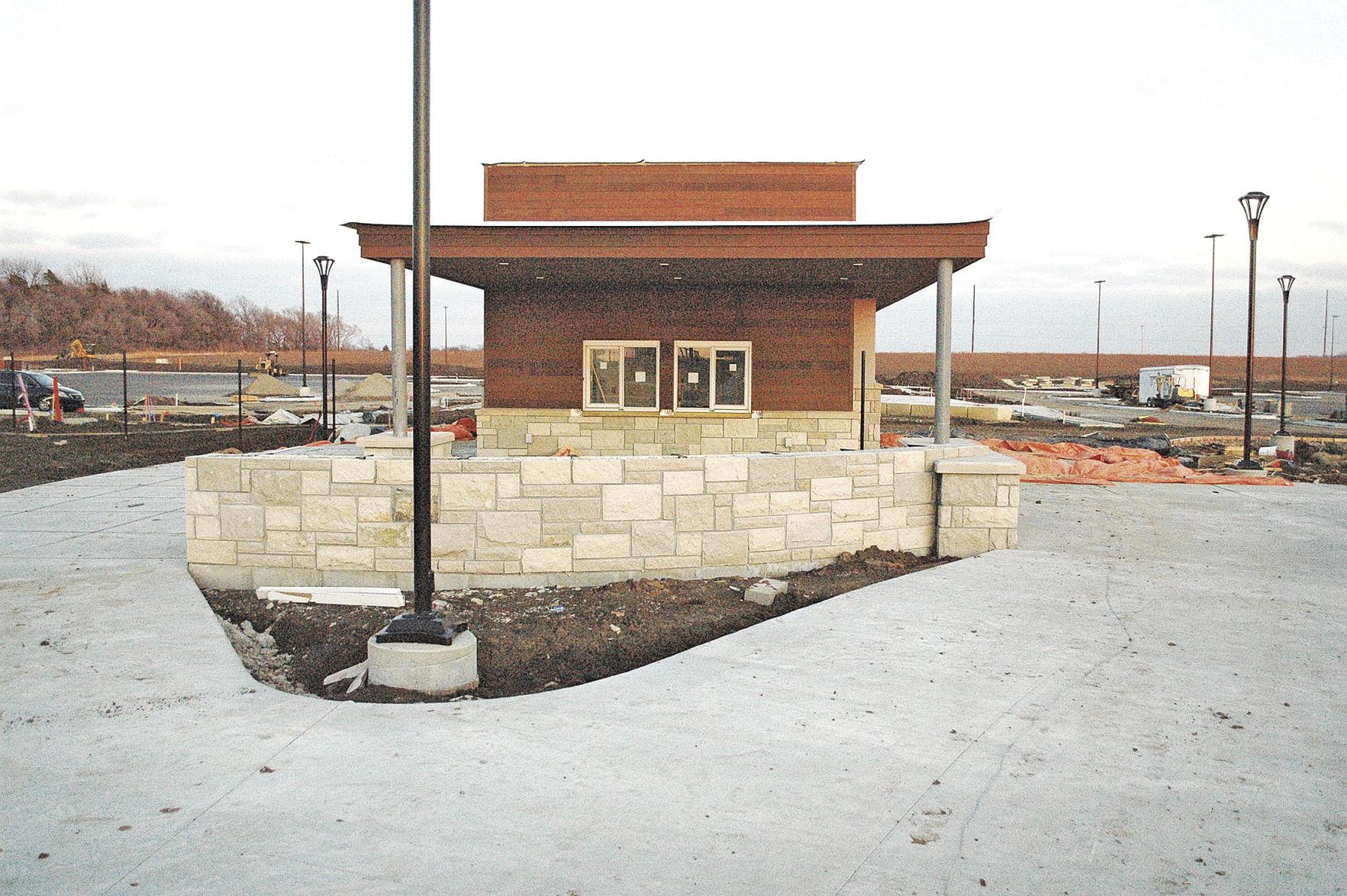 The concession and restrooms structure has been built at Decarsky Park. The park likely won’t be open to the public until next year in order to allow the natural grass to take root.

When the park does open, it means Derby will have five major parks: Decarsky, Central Park, Warren Riverview, High Park and Garrett Park. Decarsky is the third one in the master plan.

Mendoza said it’s been “amazing” to see the way the park fell into place after years of planning, input from stakeholders and design work.

While construction can be seen by the public, other work that affects the park is going on behind the scenes with the ball fields management.

Last April the council approved a memorandum of understanding between the city and the Derby Recreation Commission for construction of the fourth ball field at the park. The memorandum included the responsibility of both parties to negotiate and develop an agreement for park operations and field maintenance actions at the park and at other ball fields in the city.

There are a lot of details involved, he said, as it’s “management of a system.”

Mendoza said he hopes to bring a completed agreement back to the council within the next three months for review and discussion.

Dan Squires, Derby’s director of planning and engineering, gives a briefing on the ARC 95, or 95th Street Corridor plan. Squires and other officials want to make the plan part of the list of regional priorities in the long-range transportation plan developed by the Wichita Area Metropolitan Planning Organization.

Looking ahead is a key element to meet the area’s transportation needs. That was the major takeaway from a briefing by Dan Squires, Derby’s director of planning and engineering, during a recent presentation before the WAMPO Transportation Policy Body on the ARC 95, or 95th Street Corridor.

“This is about planning for the future before some of those transportation challenges arise,” Squires said to the crowd of 35, which included several other Derby officials.

Successful planning requires vision, and the region needs to look ahead for its collective future needs, he said.

As envisioned, the plan would provide a clear-line, east-west route in south Sedgwick County, one that doesn’t currently exist, along with both a new Arkansas River crossing and a grade-separated crossing of the BNSF Railroad line.

The focus is on 95th Street between Woodlawn Boulevard and Broadway, or U.S. 81.

The plan has been revealed for several years now, and received public input during a series of area meetings, including several well-attended ones in Derby.

Four options for crossing the river and railroad were evaluated. The design recommendations were a grade-separated option over the highway and K-15, two-and three-lane improvements with the ability to expand to five lanes, and phased construction.

The point of going to this meeting was to make the ARC 95 project part of the list of regional priorities in the long-range transportation plan the group is developing.

MPOs are federally required regional policy bodies in urbanized areas with populations of more than 50,000.

Locally, the group is responsible for carrying out the metropolitan transportation planning process in three counties and 22 cities in south central Kansas.

Squires was asked to make the presentation because of his familiarity with the project.

And, being from Derby, he represents the largest city outside of Wichita that would be affected. Other communities involved in the plan include Clearwater, Haysville, Mulvane and Rose Hill.

“There’s no funding now, but to be eligible for federal funding, you have to make it into the long-range transportation plan,” he said. “If you don’t get into the plan, that limits some of the funding mechanism.”

As presented, project costs are broken into three phases:

Phase 3: $8 million, which would include work from Hydraulic to Hillside.

A vast part of the expenses would be in building a bridge and working on the railroad crossing.

One of the positives of the plan is that it has the support of the railroad.

“That’s not always the case,” he said.

Another would be easing traffic at 47th and K-15, he said. Currently, traffic making a left turn onto 47th backs up and this would ease that problem.

Along with improved traffic flow, there would be enhanced safety and emergency response and more economic development, Squires said.