The VanEttens’ house and Christmas display has become a fixture in their neighborhood after a little over a year in Derby.

While only having lived in Derby for a little over a year, Paul and Jeanene VanEtten’s Christmas display at 1506 Blue Spruce has already become a fixture in the neighborhood – though that’s par for the course for them.

“Every holiday – Halloween, Thanksgiving, Valentine’s, Fourth of July, even St. Patrick’s Day – we go all out for holidays,” Paul said.

Christmas is a little extra special, though, and the neighbors have taken notice. While Paul was doing yard work one day, the VanEtten’s neighbor from across the street informed him of the city’s Holiday Lights Tour and Contest and encouraged their entry – projecting “you guys will win.”

The VanEtten’s are one of nearly 50 entries in Derby’s first Holiday Lights Tour and Contest – competing in the traditional category. While Paul noted they did a little their first Christmas in Derby last year, they definitely upped the ante for the contest.

Jeanene has been requesting a lighted arch in the driveway, which Paul installed this year, while also adding lights across the roof and Santa’s sleigh. The sleigh – received from Jeanene’s grandfather – was refurbished and put out this year as a photo op for visitors.

“If I actually had the Santa suit and it wasn’t for all the circumstances going on,” Paul said, “I was actually going to get in it and invite people to come take pictures with Santa Claus.”

Over the course of five years, the VanEttens have been building up this display, which also includes numerous inflatable Christmas creatures, decorative signage and an animated display synced to music projected on their garage door.

For Jeanene, there is no picking a favorite; she loves it all. Paul, meanwhile, enjoys it more for nostalgic reasons.

“I wanted everybody to be like, ‘oh hey look, check out that house.’ Hopefully it was my house, but it really wasn’t growing up.” Paul said. “Now, there’s a lot of traffic through here. I never noticed until now.” 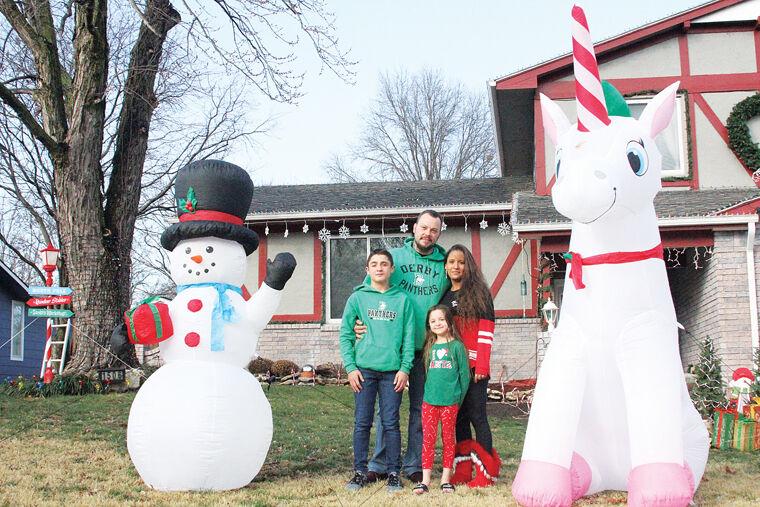 Participating in Derby’s Holiday Lights Tour and Contest, the VanEttens (Paul and Jeanene, back, and their children, Dason and Novahlyn) decided to go all out decorating for Christmas this year.

With more than 2,500 bulbs in the display (just counting the strands of lights), there is a lot to behold. Paul said he has seen more people taking notice this year – whether neighbors or cars passing by and stopping for five, six minutes.

Remarking on how much she loves it, one neighbor admitted she looks forward to every holiday and the display the VaneEttens create.

No one likely loves it more than Jeanene, though, who goes all out decorating for Christmas. In fact, she admitted the outside display probably would’ve been grander this year had they not left other decorations up through Thanksgiving.

“There probably would’ve been more if we started back in September,” Jeanene said.

All in all, Paul said it took about 45 hours over the course of a week to set up the full display this year – finding the warm days to put in work and putting in a full nine hours on deadline day to complete the finishing touches.

Once the Thankgiving decor went down, the Christmas lights started to go up – with Paul having to recruit a little outside help this year given the grander scope.

“I had an electrician come in and run new electrical to the box so I could plug in everything out front,” Paul said.

Paul also admitted he still had to maneuver the lights around to balance things out as he blew the breaker twice while setting up the display.

Taking joy from decorating for the holidays and going to see other displays, the VanEttens hope those who visit theirs experience that and get in the Christmas spirit.

For a map of the houses on the tour, visit derbyks.com/holidaylights and look for more photos of participating homes on pages 11-12 of this edition of The Informer.

A conditional use application from AT&T for a cell tower – like this one near Nickerson – to the northeast of High Park was officially disapproved last week by both the Derby Planning Commission and Metropolitan Area Planning Commission.

During a public hearing at a special meeting of the Derby Planning Commission Dec. 2, feelings of Derby residents were made very clear – as a handful spoke up in opposition to a proposed cell tower near High Park and the neighboring Spring Ridge development.

Reviewing the application for a 235-foot tower northeast of the High Park entrance near the James Street roundabout, City Planner Scott Knebel pointed out there are a number of prohibitions when reviewing a conditional use application. Service to/from a particular area, availability of other locations and restrictions greater than those determined by the Federal Aviation Administration were all criteria that could not be used in evaluating the application (per state law).

Speaking on behalf of the applicant, Glen Locke of Network Real Estate LLC (which handles numerous site acquisitions for AT&T) noted the tower was requested precisely for service reasons – as the company’s coverage maps showed a need in Derby.

“AT&T’s coverage is pretty insufficient at this point,” Locke said. “This particular site is designed to cover the majority of Derby. We’re trying to provide better coverage for the customers AT&T has in the area.”

Locke noted the proposed site had to be close enough to the city to provide adequate coverage and reach surrounding towers. However, residents in the nearby Spring Ridge development took issue with the location of the communication structure.

Numerous residents from North High Park Drive spoke out against the potential “unsightly” cell tower and how it would affect the surrounding area – from the natural landscape (both to view and inhabit) to future development and property/resale values.

“My fear is we’re going to put this tower up and that’s going to destroy the livelihood of all these animals out there,” said Brian Simpson. 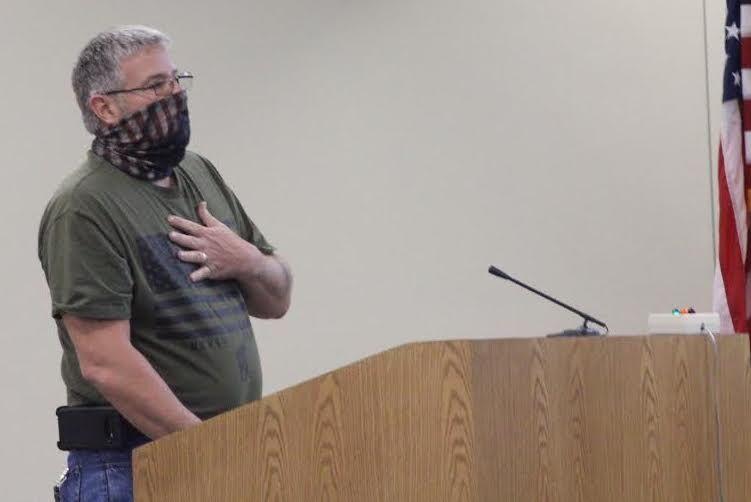 Derby resident Brian Simpson was one of several from the Spring Ridge development to speak to the detrimental impact of the potential cell tower.

“You may be getting better service from AT&T from the location they’ve picked, but you’re going to directly impact my personal property and the value of my property,” said Michael Beyer.

“If this goes up,” said Randy Megli, “seriously, my house would be better off burning down than me trying to live there and sell it later.”

Admittedly, Megli noted he would not have bought his property if the proposed “monstrosity” would have already been constructed.

City Manager Kathy Sexton also spoke to a number of concerns Derby’s governing body had with the potential structure – starting with the effect on the nearby city property at High Park.

“We’re very concerned about being able to use this premier regional park in the way that it has been used for years now and is intended to be used in the future,” Sexton said.

Recreational sports leagues and social events like the Smoke on the Plains barbecue and music festival were activities Sexton noted could potentially be impacted.

Sexton echoed citizens’ concerns of the impact visually on existing homes as well as how the structure would conflict with growth intended in Derby’s comprehensive plan. The area in which  the tower is proposed is planned for low-density residential development in the future – with James Street intended to extend east through the roundabout eventually.

Knebel noted there were a number of letters received in support of the tower, but staff findings of facts highlighted many similar issues as brought up by Sexton and residents – detrimental visual impact, conflict with the city’s comprehensive plan for future growth, etc. Commissioner Dana Quigley also pointed out that financing of homes in that area could also be impacted on top of the issues brought up regarding current property values.

Per the city’s special use guidelines (akin to the county’s conditional use framework), a commercial structure would not be allowed on the proposed site – with the findings of fact showing additional issues regarding the zoning.

“The commercial use proposed for the property would negatively impact the ability of the subject property to be developed for residential uses permitted by its current zone,” Knebel said.

Derby Planning Commission member Jessica Rhein viewed the application primarily as a zoning issue. With Derby having done a good job of hiding similar structures throughout the city, she noted she would like to see some zoning options in the future to allow for a structure on the east side of town.

Staff recommended disapproval of the conditional use application, which the planning commission did unanimously. With the MAPC also voting in disapproval of the cell tower after a public hearing Dec. 3, there is no further action necessary unless the applicant appeals.