Derby Police responded to a pedestrian, train collision in the 7300 block of K-15 Highway late Sunday evening, with one fatality being reported.

Around 8:45 p.m. on Sunday, Feb. 28, the Derby Police Department was alerted to a train, pedestrian collision in the 7300 block of K-15 Highway (near the K-15/Meadowlark Boulevard intersection) that left one dead.

Derby Police Chief Robert Lee reported a 16-year-old female Derby resident was on the tracks a quarter mile south of Meadowlark and struck by a train.

“As a result of that, she received fatal injuries,” Lee said. “At this point, we’re still fairly early into our investigation. We’re trying to piece together why she may have been on the track and exactly what happened.”

No name is being released at this time as Derby PD is waiting until all next of kin are notified.

The Derby Police were on scene from the time of the collision at 8:45 p.m. until 1 a.m. and the department continues to lead the investigation.

Lee said anyone with relevant information to assist in the investigation of the collision can contact the Derby Police Department at 788-1557.

Emily Williams, a history teacher and co-webmaster at Derby High School, receives the first round of the COVID-19 vaccination. Williams said she was not afraid to get the vaccine because she trusts science.

Nearly half of the staff members at Derby Public Schools received their first dose of the COVID-19 vaccine last week.

The district vaccinated 569 staff members on Wednesday and Thursday last week, which is about 47.6% of the district’s 1,195 total staff. Local pharmacies assisted with administering the shots during clinics at the USD 260 administrative center.

Emily Williams, a history teacher and co-webmaster at Derby High School, said she wanted to be inoculated against the coronavirus to protect herself and loved ones, as well as to strive for a return to normal.

“This is definitely a historic moment,” she said. “I am thankful to be part of it and feel hopeful that better days are ahead.”

Williams said she was confident in the vaccine because of her trust in science.

“I have absolutely no concerns whatsoever,” she said. “My arm has been a little stiff today, much like when I get my yearly flu shot – nothing painful, though.”

“If there’s vaccines that are still left out of the 700, we will send those back because there are other schools that still are trying to get their staff vaccinated,” she said at the Feb. 22 Derby school board meeting. 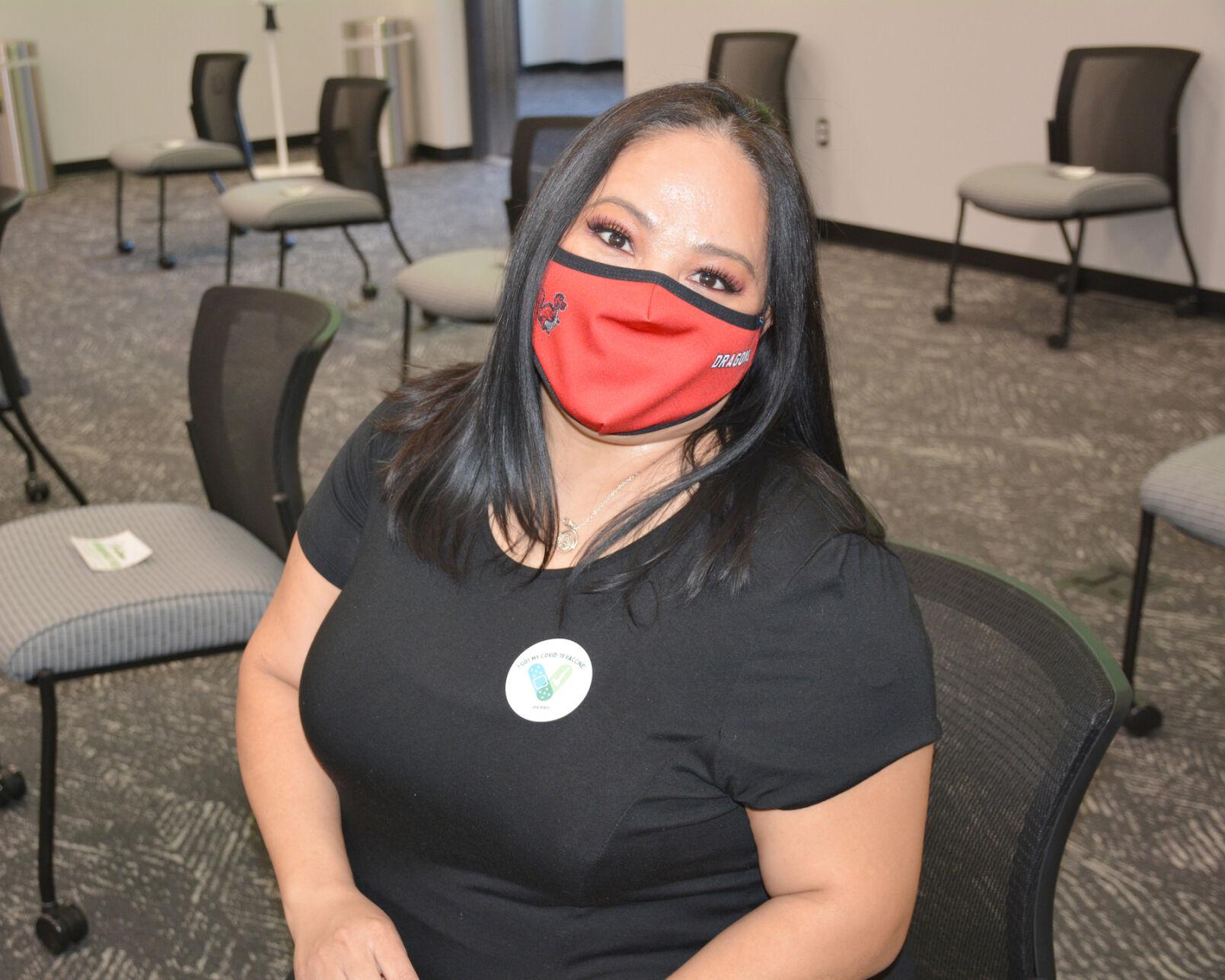 Christina Garcia, a special education paraprofessional at Derby Hills Elementary School, poses for a photo with a sticker that shows she’s received the first round of the COVID-19 vaccine. Derby schools administered 569 initial doses of the vaccine to staff on Feb. 24 and 25.

Christina Garcia, a special education paraprofessional at Derby Hills Elementary School, said “love for my family, myself and my neighbors” motivated her to get the vaccine.

“I could not imagine my family living without me nor could I imagine going through life knowing I infected someone else with the virus,” she said.

Garcia said she was grateful the school district organized the process for staff in a convenient way that felt safe.

“Thanks [to the nurse] for easing me through it as I hate needles in general,” she said.

Staff will have to receive the second dose of the vaccine after a minimum of 21 days after the first dose. The district plans to host second dose clinics for staff at a future date.

Since the start of the school year, the district has reported 423 confirmed cases of the coronavirus – 243 among students and 180 among staff. The district’s weekly cases peaked at 35 in November, and have been on a steady decline since the start of February – averaging about nine cases per week throughout the month.

Stephanie Dunback, a behavior and social communication teacher at Cooper Elementary School, said she hopes more people will feel comfortable getting the vaccine as they see others receiving it and as more data and information is released.

“I hope to lead by example with my actions to help stop the spread,” she said. “I also hope to advocate for the individuals like my niece, who is medically fragile and may not be able to get the vaccine but still should be able to feel safe.”

After meeting through different studio functions, Bill Koch eventually proposed to his wife, Robin, at an Amira Dance Productions show at the Orpheum Theatre in 2009.

Bill and Robin Koch started strictly as dance partners, with the former giving the latter private ballroom dancing lessons, before dating and eventually getting married.

Bill and Robin Koch have no problem finding something they both like to do: they simply head to the dance floor.

Dancing, Robin said, is a connection for the two.

"Some couples don't get to do their hobbies together," she said. "We do and that's really special. That's what brought us together."

The Derby couple's relationship started out with dance as they would see each other at the Amira Dance Production's annual show. Then she started taking lessons from him and the two started going out, dancing, of course.

Bill knew dance was a passion for Robin because every time he mentioned the word, "her eyes would sparkle."

Then, on stage during the Wichita studio's annual show in 2009, Bill (no relation to the family of Koch Industries Inc.) asked Robin to marry him. "Yes" was the answer and they married on Sept. 18, 2009.

For Bill, dance can be a reflection of love.

"Love is a many splendored thing and one of the splendors is dancing," he said.

It can also be an intimate time for a couple, floating them off into another plane.

"We're in 'dance world' and outside of our arms' reach, nothing else exists," he said.

At 40, Robin acknowledges there's a wide age gap between the two, but said dancing shrinks that difference and her husband is in better joint shape than she is.

The two stretch and exercise to keep their bodies in condition for their often demanding performances.

Bill, who has been dancing for 30 years, is pleased with the life change it brought to him. He took it up after he got sober and it was an AA sponsor who got him interested in it.

Robin has been dancing for 21 years. She was studying in the music department at WSU, but decided on changing her life's direction and got involved with dance, starting with belly dancing and then moving into Polynesian styles. It was for fun – and it still is enjoyable years later.

For a living, Robin worked in the TV business before deciding she really wanted to be in massage therapy, so she got an education in that profession and is working in it today along with dance education.

At the studio, she is the instructor of two dance troupes, including the "Hoop Honeys." Robin spent some of the pandemic time taking more hoop dance training. She also has trained with a circus arts expert called Safire.

A 'labor of love'

She will use that skill in the upcoming Amira Dance Production's 2021 performance, which features five performers using 20 hoops.

Her work is a "labor of love," she said.

"You spend as much time in this as in a profession, but it's not lucrative," she said.

Bill is retired from careers in the U.S. Air Force and Spirit AeroSystems, but he has lots of things to fill his days.

"I'm busier now than when I was working 40 hours a week for a company,” he said.

Part of that time is spent as a dance instructor under the name "Mr. Bill." Along with teaching at Amira’s, he works at Mark Arts and also does private lessons.

"I teach patterns, not choreography," he said. "It's like learning a new language. Once you learn the language, you make great strides."

With all the variety of dance, Bill stresses that there's no need to worry about having a partner as there's line dancing and freestyle forms.

And, he added, "it's all good exercise."

In the stage tradition of "the show must go on," their production will be held this year, albeit without a live audience.

A new show this year

The show is a big part of their dance year. This will be Robin's 21st show and Bill's 15th.

Because of COVID-19, it will be pre-recorded this year. The dancers will tape it on March 6 and then it goes online on March 13. Viewers have three days to watch it.

"It will be a challenge for us to not have all the energy there," she said of no audience.

But if they skipped the show, it would be "really hard" on all the dancers, she said.

"This adds normalcy and has given us something to work for even though we had to change things," Robin said.

Working through the pandemic has provided at least two benefits: now the show will have a lot wider reach and, in addition, Robin has been able to take classes from other instructors and make worldwide connections in the dance world.

When the show is performed in person at the Crown Uptown Theatre in Wichita, the group usually sells out the venue, which seats a bit more than 500 people.

Dances from around the world

The production's overall theme is "world dance" and, with that in mind, there will a wide variety of dance styles, including ballroom, East Indian, flamenco and hula hooping.

"The show is a reflection of our students and what we teach," Robin said. "It's a very stressful time of the year getting ready for the show, but it is something fun."

There will be costumes and props, just like a big production, but unlike the popular "Dancing with the Stars" TV show, there won't be people thrown into the air.

It will be family friendly, just like the environment at the studio, she said.

"For the most part, it's a big sisterhood and brotherhood and this big dance family that works and plays hard together," she said.

Dancing at the studio is an inclusive thing, Robin said, unlike a ballet studio, which usually requires that participants start their formal training at a young age.

"We're very proud of embracing all ages," she said. "We will find a place for you."

At home in Derby

It's common to get people in the 40- to 60-year-old range who have never danced before but find new life with the activity.

The Kochs have lived in Derby since 2014. As shoppers, they were familar with the area, and they also had friends here and were looking for a safe community, so when they house hunting, it was a natural fit.

"This is like a home town," said Bill, who has taught country western dance at the DRC and taken the Citizens Police Academy with the Derby Police.

For Robin, Derby is like a "big little town" and she hopes the couple stays here for a long time to come.

They also plan to keep dancing until "we're one foot in the grave," she said.

Bill's feeling about dancing involves a saying by the famed philosopher Friedrich Nietzsche in which he states that "we should consider every day lost on which we have not danced at least once."