Riverside Cafe Owner Paul Cohlmia, left, works the register at the cafe on a busy Saturday as he continues to seek employees for a number of positions at the restaurant.

Bianca Nix, a waitress at Riverside Cafe, serves patrons during a busy morning on Sept. 25. The restaurant is hiring for three different positions, including servers.

Drive around Derby at the moment and a pattern may start to emerge, as a number of local storefronts feature signage with a similar message: help wanted.

While the national unemployment rate has continued to dip since hitting a record high in April 2020, businesses across the nation – Derby included – are still struggling to find individuals seeking gainful employment amid the pandemic.

TenderCare owner Kevin Payne has six to seven positions he is looking to fill currently and noted the struggle to remain fully staffed has been unprecedented in his 40 years in business.

“Every day we’re pumping out information through Facebook, Indeed, you name it,” Payne said. “I’ve been through a lot and I have been telling people I have never seen the shortage of employees that I have now.”

Riverside Cafe owner Paul Cohlmia admitted he has openings for “pretty much everything” at his restaurants including cook, waitress, dish washer and hostess.

A fire earlier this year shut down one of Riverside Cafe’s three locations in Wichita and Derby, which has made the situation manageable, but Cohlmia admitted he’s not sure how that will work with the third restaurant getting ready to reopen.

“It’s easy to manage right now, but when I open that one up I don’t know what I’m going to do,” Cohlmia said.

Meanwhile, at Shelton Automotive and Shelton Collision Repair, owner Brad Shelton has four positions to fill currently. While there may be fewer openings to manage there, the length of the vacancy has certainly taken a toll – with Shelton reporting that one position on the automotive side has been open for a year and a half.

Given those staffing issues, local businesses have had to make adjustments. At Riverside Cafe, that has meant opening an hour later and closing an hour earlier on Sundays, while also eliminating some tables.

TenderCare has certainly not been lacking in service requests through the pandemic, but the staffing shortage forced Payne to do something that has also not been done before in his 40 years in business.

“Back in March, we got to the point where – we’re busy, which is fantastic – we quit taking on any new landscape projects because our backlog was so much,” Payne said. “It’s the hardest thing as a business owner to turn away business, but I also didn’t want to take on business and figure out I can’t get there.” 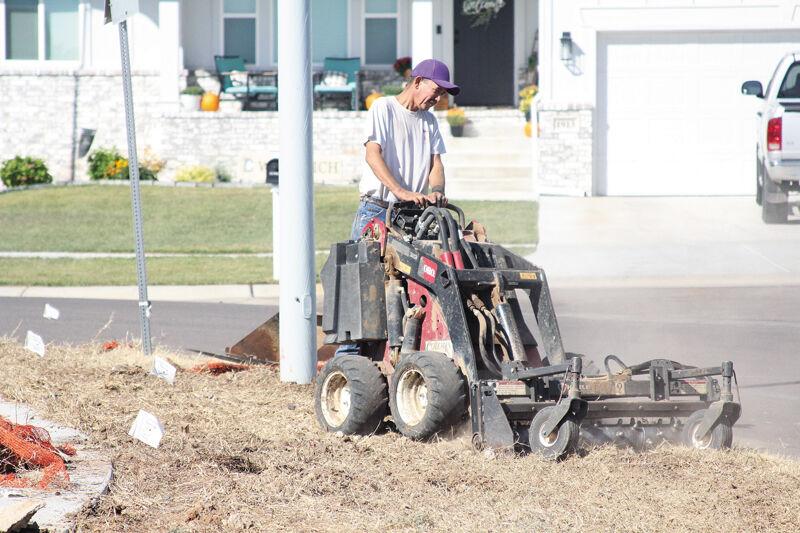 TenderCare employee Daniel Chavez works on a lawn project along Birchwood Road, one that remained on the schedule amidst a project cap put in place due to a staffing shortage during the pandemic.

Not wanting to stress the employees he has, Payne noted he had to make that tough decision. Now, he is optimistic about opening up TenderCare to new landscape projects by the end of the year.

Facing a similar challenge and not wanting to burden his employees with extra hours, Shelton noted the biggest impact to his business has been delayed repair schedules.

“We can’t get things in quick enough because we don’t have enough people, so we have quite a backlog,” Shelton said. “We can only do so much with x amount of people.”

Unemployment benefits tied to the pandemic (including an extra $300 per week) were eliminated at the start of September with an eye toward helping struggling businesses find employees, but Cohlmia, Payne and Shelton noted they have not seen that tide turn yet.

Having the child tax credits available now, though, and with discussions of another stimulus, there is a sense that things might get worse before they get back to pre-pandemic levels.

“This staffing thing, especially for the trade side of things, I think is just going to do nothing but get worse,” Shelton said.

“Prior to [the pandemic], you’d get a lot of people coming in wanting to work. We can’t get them to show up half the time. That’s hard to take when you can’t get them to come through the door,” Payne said. “It’s just the way of the world right now, and I think you have to be really cautious what you take on knowing that you’re going to be short-staffed. It’s gut-wrenching as a business owner to see it.”

Dawn Gresham, current assistant director of special services, will begin her duties as head director in October. The Derby Board of Education approved her selection at its meeting on Sept. 27.

Dawn Gresham, current assistant director of special services, will take over as head director starting Oct. 1. The school board approved her selection at its meeting on Sept. 27.

Gresham has been working in her current position since July 2020. Prior to joining Derby schools, she worked at other area school districts, including Wichita, and most recently, Hutchinson.

“It has been a lifelong goal of mine to be in this position,” she said. “I want to help serve as many families, students and staff as I can in the area of special education.”

“My best days are when I can help teams problem-solve and implement the necessary supports to make school a better place for all.”

Gresham said it has been valuable to learn the processes and procedures specific to Derby as the assistant special services director. That experience coupled with her years of experience in special education have helped prepare her to take on the new role.

Special services is a “small department with a huge role in the district,” Gresham said. The department’s responsibilities include providing oversight of individualized education plans (IEPs) and 504s, and the healthcare aspect of the district.

Now more than ever, that task is a large part of the department’s responsibilities, along with providing high quality special education.

Gresham thanked the district’s leadership team and the Derby Board of Education for entrusting her with the opportunity to “grow and serve USD 260.”

“I am really looking forward to working with the district leadership team. This team has such depth in terms of their knowledge and experiences,” she said. “I am a lifelong learner, so being afforded this opportunity to learn from some of the best is compelling.”

“[Seeley] has been an amazing asset to the school district and is leaving to pursue new opportunities,” said Katie Carlson, communications director for Derby schools. “She has been working alongside Dawn and the special services team to ensure a seamless transition.”