You have permission to edit this page.
Edit

Little Busters has had to make a number of changes to maintain operations through the pandemic, but owner Kyle Smith credited the community for helping keep the bar and grill afloat.

March Madness took on a different meaning this year for local bars – as the onset of the coronavirus pandemic across the country took away a number of revenue opportunities.

“That’s my biggest month of the year. For a sports bar in Kansas, not having basketball was a huge hit,” said Little Busters Sports Bar and Grill owner Kyle Smith.

Six months later and bars are still feeling the effects of COVID-19, as one of the businesses most directly impacted by the emergency public health orders put in place by the Sedgwick County Commission.

During the initial stay-at-home orders in March and April, curbside and carryout business was allowed while dining in was put on hold. Smith said he used up his inventory during that time and officially shut down for a span of 16 days – which allowed him to make some improvements (i.e., install a new computer system) at Little Busters and stay on top of sanitation for the establishment’s eventual reopening.

After the phased reopening in May and the return of the dine-in experience, bars specifically were once again hit hard as Sedgwick County passed an emergency public health order that shut down those establishments for about a month. That order was recently amended to allow bars to operate at 50 percent capacity, but also came with an 11 p.m. curfew on business hours.

Being a bar and restaurant, Smith noted Little Busters was able to continue operations through the passage of that public health order – though the new curfew has taken away some of his business.

“From 11 (p.m.) to 2 (a.m.), those are pretty big hours for me,” Smith said. “We have a solid second shift crowd that comes in from Spirit and I basically haven’t seen those guys in a month now.”

While Smith has lost a small portion of his business, dedicated bars like The Shop in Derby felt the effects of the order even more. Owner Cliff Starbird said his bar has been closed for roughly four of the past six months and is not even at 25 percent of its normal business.

The Shop reopened to customers on Aug. 31, focused on complying with the newly amended order (i.e., social distancing, wearing masks, etc.), but Starbird admitted he is not sure what the remainder of this pandemic rollercoaster ride has in store.

“I never dreamt it’d last this long, for sure,” Starbird said. “To be honest, I don’t even know if I’m going to stay open. I don’t have a clue right now.”

Like Little Busters, Starbird noted he is missing that business from 11 p.m. to 2 a.m., while the irregular hours and shutdowns have also pushed his clientele to seek out other drinking establishments.

Despite all the changes (wiping down menus, rotating condiments between each use, etc.), Smith said he and his staff have tried to keep the experience at Little Busters as normal as possible for his clientele.

Community members helped keep Little Busters going when it was relegated to curbside and carryout service only, and Smith noted getting an Economic Injury Disaster Loan also helped the bar and restaurant push through that (while allowing for upgrades as well).

Smith admitted he didn’t expect the pandemic to last this long. Even though he is ready for it to be over, for Little Busters at least things are starting to look a little more normal.

“Right now, with us being on the restaurant side and us not getting shut down again like some of the bars did, we’re actually doing OK. Even with our capacity being at half and all that kind of stuff, we’ve stayed pretty steadily busy around here,” Smith said. “As long as I can stay open and keep serving, then I should be OK.”

U.S. Space Command is looking for new headquarters – with Derby one of the communities being considered.

Four Kansas communities submitted proposals to become home to the headquarters of U.S. Space Command – responsible for military operations in outer space – including Derby, Kansas City, Kan., Leavenworth and Wichita. Each has responded to requests for information from the federal government with proposed development sites in their communities as part of the second round of the selection process – with all four sites still being considered.

The four proposals address facility space requirements, workforce needs, proximity to a military installation, and other vital elements necessary for the successful operation of the U.S. Space Command headquarters.

“Kansas is the perfect place for this facility, and we are prepared to do the work to get it here,” Gov. Kelly said. “We look forward to further discussion with the U.S. Air Force as it works toward a decision on the U.S. Space Command headquarters’ location.”

Ted Eberle and his wife, Jan, were inseparable during their 56 years of marriage. Ted passed away last month. He was 80 years old.

Heaven got a firecracker last month. Ted Eberle, former Derby High School marketing teacher and beloved mentor and friend, passed away in late August. He left behind a legacy through teaching, but his impact outside of the classroom was equally important.

Jenni McCausland, Andover city administrator, called Eberle a firecracker when looking back at the impact he made on her. McCausland was a student of his at Derby High School. She was a junior when she met him in the Distributive Education Clubs of America – DECA – program, which Eberle ran.

She immediately noticed the energy he brought into the classroom. His students gravitated toward that energy.

“He just had such a passion for young people and trying to help guide their futures,” McCausland said. “He and his wife’s [Jan Eberle] classrooms were across the hall from each other. Kids would stop in their rooms before school, between classes, or after school. They were just those people to the students.”

Eberle was a mentor to McCausland before she even understood the full meaning of what mentorship could be, McCausland said. He helped her apply for scholarships and colleges. He and Jan were also always willing to give up their own free time to spend time with a student. 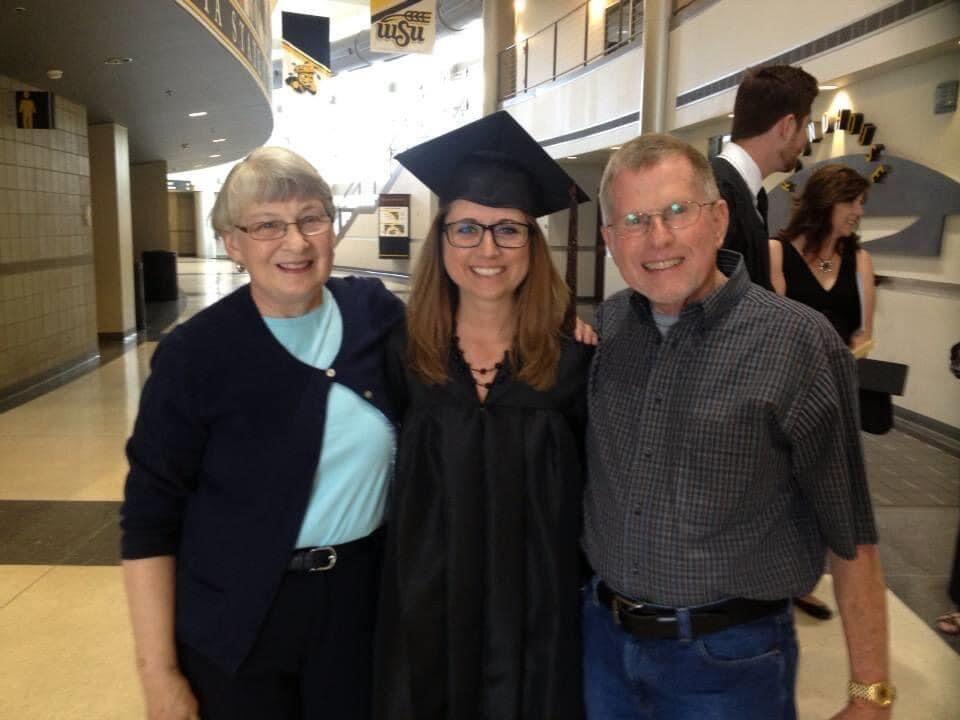 Ashley Purdum, an associate professor at Wichita State, gets emotional when she thinks about how much time the couple gave up for their students.

“I just start looking back at all the weekends and nights,” Purdum said. “You don’t realize it when you’re a kid, but as an adult you think about them giving up those weekends and nights. They didn’t get anything out of that. As a kid, it meant a lot, but as an adult, it’s like ‘wow, they really gave up a lot of time and put in a lot of effort.’ And they loved it. It was fun for them.”

Spending time with his students and helping form their future was what Eberle loved to do. Mark Glaser, a professor in WSU’s Hugo Wall School of Public Affairs, said Eberle was always “very positive” about his students. 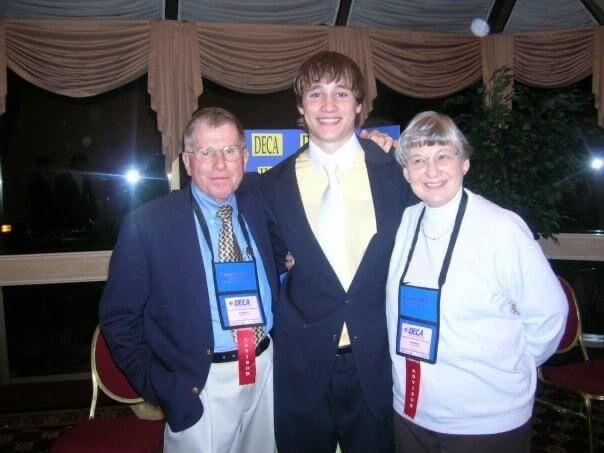 Ted and Jan Eberle take a photo with David Heckathorn, a former student of Eberle's, during a DECA competition. Ted coached students in DECA, which is a student organization focused on leadership and business skills.

“He just sort of lit things up,” Glaser said – like a firecracker.

As a young man, Glaser was shy and lacking in social skills. Eberle helped Glaser break out of that shell and become more outgoing.

“You just felt more capable and confident [around him],” Glaser said. “I think it might have been different without Mr. Eberle. He had more confidence in you than you might have in yourself.”

Glaser was emotional when he heard that Eberle had passed away. But Glaser took solace in knowing that wherever Eberle is now, he’s still the same Ted Eberle – happy, passionate, and always read to lend a helping hand.

“He’s off on his next adventure now,” Glaser said. “Whatever follows this life, Ted is probably out there with a smile on his face.” 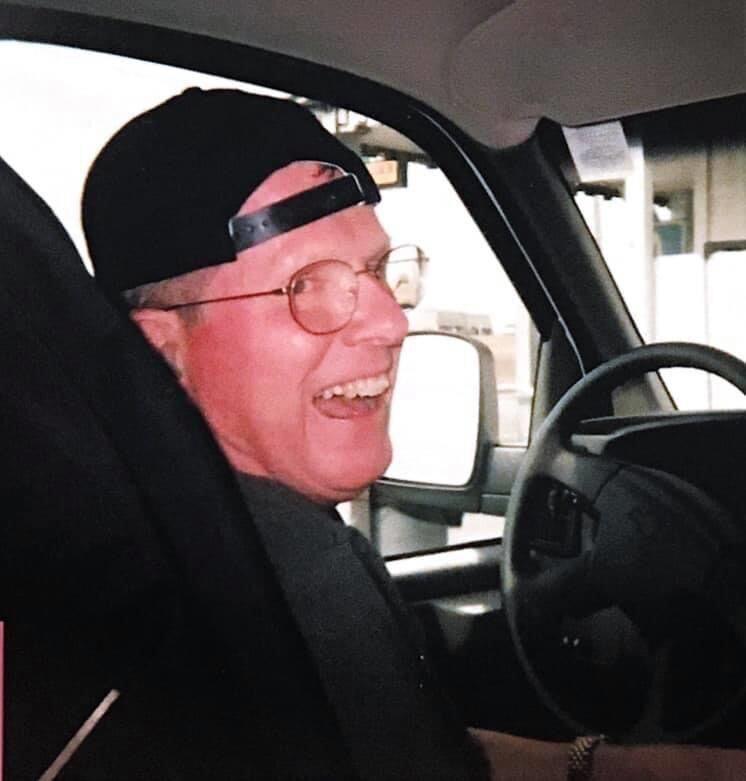 Ted Eberle was known for his boundless energy. A former student, Jenni McCausland, called him a "firecracker."