Marah Franke and Esther Karhayu were born nearly 9,000 miles apart. One grew up under Kansas skies and the other with scents of salt water and sounds of the Indian Ocean off the Kenyan coast.

Both born in families that emphasized academics and encouraged athletics, their paths crossed thanks to the pitch. Soccer has provided the path to a lifelong friendship that officially began as college athletes in Hutchinson, Kan.

Start of a lifelong relationship

Karhayu put together a decorated soccer career in Kenya. She was once a member of the women’s national team and was team MVP of Lulu High School three different times.

Having spent two years in her late teens in Nairobi, Kenya, Karhayu was intrigued at the prospects of a college scholarship in North America. Her coach once attended Park University in Missouri, driving her to look at college even further.

Marah played four sports at Derby High School. She ran cross country, track and also played basketball and soccer. She was a two-time state qualifier on the cross country course and was a part of four postseason trips with Panther soccer.

Both were a part of the club circuit in soccer, aiding a desire to play collegiately.

While their trips to the Hutchinson campus were 8,800 miles different, a life away from home was a new experience for both.

“The scary thing for me was being away from family,” Marah said. “I was most excited about meeting people that I hadn’t played against and weren’t local.”

Karhayu recalled the drive from Wichita to Hutchinson and how much she began to feel culture shock.

“All I could see were plain fields and hay all day,” she added.

After the season ended on Oct. 26, 2019, the two kept in touch as any teammates would do. However, a new door opened as Thanksgiving approached.

Marah invited Karhayu and two other teammates to Derby to join her family for the holiday. It was certainly a foreign concept as she had never celebrated Thanksgiving before.

Karhayu, who talks to her family almost daily through WhatsApp, said they were thrilled that she found a home away from home.

“[My mother] would pray for me that I’d be safe and find somewhere stable,” she added.

All it took was a few meals and joining in for the Franke Thanksgiving-family tradition of building LEGO sets to be a part of the family.

“We build for days, days and days,” Marah said. “Esther was probably the only one at the table until 11:00 p.m. working on the LEGOS. She is definitely experienced in game nights with us.”

It was a family member that also helped Karhayu travel home to Mombasa, Kenya for Christmas break two weeks later.

Nearly every college athlete has been dealt a blow by the ongoing battle of COVID-19. Hutchinson Community College was one of the last Kansas schools to shut its doors in the spring, sending Marah home to Derby and Karhayu to local apartments to wait out the pandemic. Further housing restrictions forced these students out of the apartments and without a place to live.

Marah approached her parents, Matt and Laura, about the idea of having Karhayu move in for the summer. Having already spent so much time with her, they happily obliged.

It’s a door that Karhayu happily walked through.

“I’m so thankful for these guys because where else could I have gone?” she said. “My closest relatives are in South Carolina and West Virginia so I didn’t have money to go there.”

With games, practices and workouts stripped away, their friendship deepened even further as they spent countless hours under the same roof.

“It’s neat for my kids to get to know someone who comes from a different culture,” Matt said. “She’s from a country that is thousands of miles away, but she is created in God’s image and someone we respect.”

Nothing could have prepared Karhayu for the text she received the morning of Wednesday, Sept. 30.

Preparing for her first day on the Hutchinson Community College campus, she received a text from her sister, Ruth, that her mother, Rebecca Atuma, had passed away. 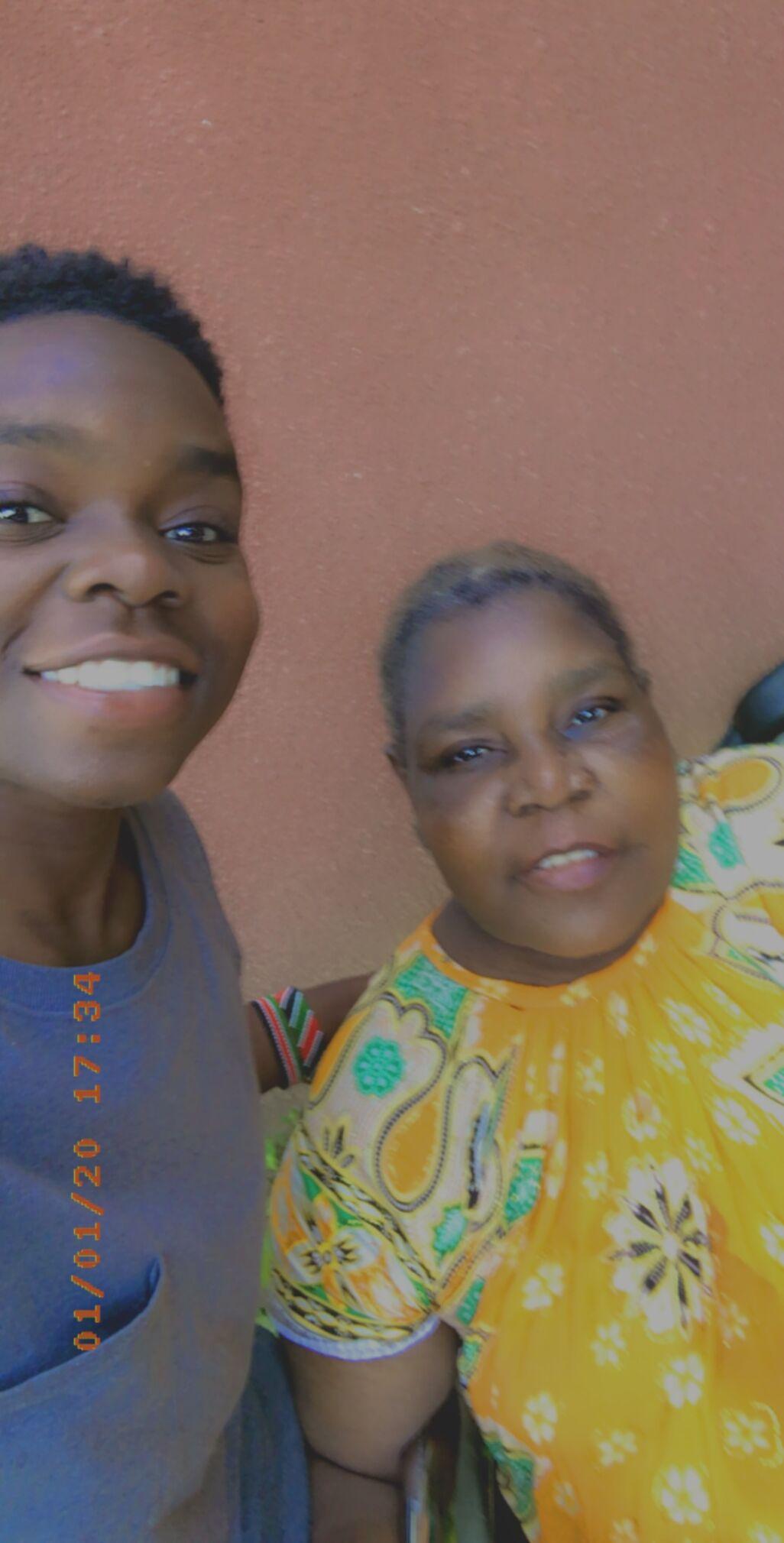 Marah instinctively saw a look in Karhayu’s eyes that morning and stopped her to talk.

“‘Mom, I’ve never had to do this before, I’ve never walked with a friend who lost a parent,’” Laura said of her phone call with Marah after hearing the news. “I told her to be with her, hug her, let her cry and just love on her. There was nothing else she could do.”

When Marah arrived in her room, Karhayu was on the phone with Laura, breaking down, repeating a devastating reality that her mother had died.

“In that moment, Esther reached out to me because I think I’ve been a mother figure since she came here,” Laura said. “… I listened to my two girls sobbing, got Marah’s attention and told them we loved them and we’d be there soon.”

With the distance between her family being so far, Marah struggled to comprehend what Karhayu was feeling.

Go home to Mombasa or stay in Hutchinson? It’s the question Karhayu immediately pondered as she understandably longed to be with her family.

Karhayu’s father encouraged her to stay at school and finish the semester as it would be what her mother would have wanted.

With roundtrip air fare of almost $3,000, cost became an obstacle as Karhayu decided how she’d be able to make it home.

That’s when the Franke family called on the Derby and Hutchinson communities to give Karhayu a chance to reconnect with her family and spend Christmas break at home.

It took just five days to raise over $4,000 and more than enough funds to book her flight.

Karhayu and the Franke family had the money to travel to West Virginia and surprise her with a visit with a former Hutchinson teammate and a friend from Kenya.

It’s an overwhelming reality for a young woman who only traveled to Hutchinson, Kan., a year earlier to pursue a soccer career.

“These people contributed to help me book my flights back to Kenya and I’m so thankful for that,” she said. “All I have to do now is to stay strong, believe in God and trust in him. I know it’s not going to be the same when I go back home. I’m a little bit scared.”

Karhayu flies back in January and the Franke family will be eagerly waiting her return.

“She’s a fourth Franke kid now,” Matt said. “We have Makena, Evan and Marah, but Esther is like our adopted child. COVID brought her to us and she’s just a family member now.”

With some support along the way, Michael Teer nears the finish line of the virtual Marine Corps Marathon he ran through Derby on Oct. 31.

While most people were making final preparations for their Halloween celebration the morning of Oct. 31, Michael Teer was in the middle of running his second marathon through the streets of Derby.

Teer, a former patron of USD 260 who currently lives in Belle Plaine, was set to run the Marine Corps Marathon in Washington, D.C. this year. It was a task he took on to mark the 40th anniversary of his graduation from boot camp. While the event (scheduled for Oct. 25, 2020) went virtual this year, the shift in format did allow Teer to line up his participation with the exact date of his anniversary.

Originally enlisting in August 1980, Teer spent 12 years serving with the U.S. Marine Corps, working his way up to the rank of Sergeant.

Approaching graduation from high school, Teer saw service in the military as a fruitful job opportunity. He had appointments with recruiters from the Army and the Marines. Between a no-show from the Army recruiter and the opportunity that awaited in the Marines Corps, his decision was almost made for him.

“My hobby was electronics and they offered me an electronics job, so that’s what I chose,” Teer said.

Serving as an avionics technician in the Marines, Teer worked on and repaired radio navigation systems on A-6 Intruder aircraft. Primarily stationed in Cherry Point, North Carolina, he did tours in Japan and the Philippines before going on Embassy duty to support the state department and provide security at U.S. Embassies around the world. That included stints in Capetown, South Africa, and Dhahran, Saudia Arabia.

Toward the end of Teer’s time in Saudi Arabia, Saddam Hussein invaded Kuwait, launching the Gulf War (codenamed Operation Desert Shield/Desert Storm) – and leading to a short turnaround for Teer’s next stint of service in the country.

“I finished my tour in Saudi Arabia, went back to the states to my new unit and then was redeployed back to Saudi Arabia for Desert Storm,” Teer said. “We provided air support and then my job was to make sure the airplanes were operable, as far as electronics go. We did have some airplanes that were damaged that we had to repair when they got them back.”

During his tour of service in war time, Teer noted none of the members of his unit were lost. While they weren’t necessarily in the middle of all the action, it was certainly not an experience he will soon forget.

“Where we were at, we were away from the frontlines, but we were still being threatened by the Scud missiles. They would fly overhead all the time and we’d have to run to the bunkers,” Teer said.

Even so, Teer said patriotism was part of his family’s values. Having an older brother who served in both the Army and Navy pushed him to join.

Calling it an honor and duty to serve, Teer admitted he was glad to be deployed during the Gulf War.

“It was a coalition of nations sticking up for a smaller country,” Teer said, “and just knowing that you had a part in that was pretty satisfying.”

No specific experiences from his service have carried on into his civilian life, Teer said, but his wife jokes that it is easy to spot his military training in some of his daily routines since “you can’t take the Marine Corps out of the person.”

Celebrating his Marines anniversary through the marathon, Teer noted the initial plan was for him to run the race in D.C. with a fellow member of the Corps. That will now have to wait until next year.

However, while Teer didn’t have his running partner completing the marathon virtually in Derby, he was not lacking in support. Thanks to a Facebook post from his wife, there were nearly 50 people lining his route through Derby to motivate him to keep going.

“There was not a stretch of more than a quarter mile that I didn’t have somebody either driving by yelling, ringing a cowbell or on the side of the road with signs. That makes a difference,” Teer said. “It was awesome.”

When it comes to running a marathon, it takes motivation to keep going. The same could be said of a service career. Teer found his and advises anyone seeking that out to think about the military.

“I would recommend it. Even a single tour – I think you do three years now – you will get training that you can’t get anywhere else. Not just job-related training, but discipline type of training that you will carry on and will be recognized by other people throughout the rest of your life,” Teer said. “It will actually give you a different aspect on life sometimes, too, depending on whatever vocation you choose to do.”