Panther stadium will be empty for a while after DHS football activities were suspended following eight positive COVID-19 cases being identified on the team.

Derby Public Schools has identified an additional eight COVID-19 cases inside Derby High School. At least eight of those cases are tied to the football program, bringing the total to 10.

With guidance from the Sedgwick County Health Department, the news prompted the district to suspend all football-related activities indefinitely (only at the high school). That includes the Sept. 25 home opener against Salina South. Homecoming activities are also off, but will be rescheduled.

“This [decision] is following the Sedgwick County Health Department’s strong recommendation of suspending all football-related activities for the immediate future while close contact tracing and necessary next steps are completed,” the district said in a statement.

At this time, the Sedgwick County Health Department is continuing to investigate COVID-19 cases at Derby High School.

The suspension of football comes four days after first identifying two cases, putting 300 students in a temporary quarantine. A total of 94 students remained in quarantine on Monday following contact tracing by the Sedgwick County Health Department. That initial decision allowed the varsity football game against Salina South to still be played.

The only games that were cancelled on the day of the first quarantine were freshman and JV football games against Bishop Carroll.

“The health department erred on the side of caution on Monday to decide who the close contacts were,” USD 260 communications director Katie Carlson said. “… They had to definitively clear other students until there are other positive cases that would require further contact tracing.”

As of 12:00 p.m. on Friday, there are 18 cases identified through Derby Public Schools. That includes four in middle schools (all students) and four in the elementary schools (three staff, one student). The district does not state which buildings these cases are coming from.

Sources also indicated that Thursday night’s freshman volleyball quad was cancelled due to a positive COVID-19 test on the team.

Carlson reiterated that all quarantine notices and contact tracing is done through the health department. It also clears students on when they are allowed to go back to school.

“We can help assist them in relaying information on their behalf,” she said. “It is not our authority or decision on who quarantines.”

While no official decision has been made about changing learning models, the newest influx of cases will be presented to the USD 260 gating committee on Wednesday, Sept. 30 at 1:00 p.m.

“I’m confident that this data and this information will be a part of that meeting,” Carlson said. “The number of cases will be a topic of conversation at that meeting. Additionally, we’ll work with the health department if we need to make a change sooner than that.”

The district recently made a change to its coronavirus case reporting process. At the Derby Board of Education’s Sept. 14 meeting, USD 260 Superintendent Heather Bohaty presented an update on the process when a student is COVID-19 positive. Initially, the district’s plan was to only notify individuals who were close contacts of the student. That notification has now been broadened. Individual close contacts are still notified, but now the entire class that the COVID-19-positive student was in will also receive notification. The Sedgwick County Health Department recommended that change be made.

Stay tuned to derbyinformer.com for additional details on this developing story.

The full district statement is below.

Due to an increase in additional positive cases of COVID-19 at Derby High School, Derby Public Schools is suspending all football-related activities at Derby High School. This is following the Sedgwick County Health Department’s strong recommendation of suspending all football-related activities for the immediate future while close contact tracing and necessary next steps are completed. Tonight’s Homecoming festivities have been canceled and will be rescheduled. This is a joint decision with Salina Public Schools. A date has not been determined at this point when football may resume. If you have already purchased tickets, they may be used at a future date. At this time, Derby High School has eight positive cases related to football.

Nothing in 2020 has been “normal,” and the opening of the new Hubbard Arts Center certainly falls into that category.

Originally scheduled to have a grand opening in April, those plans had to be put off and the center – an extension of the Derby Recreation Commission – didn’t officially open for programming until mid-June.

Even with those delays, the market for the Hubbard Arts Center and the programs it offers has been clear from the start – with the center drawing a number of individuals from Derby and the surrounding area for its classes since its summer opening.

“All things considered, I’ve been really pleased,” said DRC Superintendent Chris Drum. “I think the staff has done a very nice job in being creative but also responsible in our offerings.”

While Drum noted adult classes have been a little slower to fill up (something staff expected due to COVID-19), youth participation has been extremely high.

Community Wellness Coordinator Debbie Williams reported that 133 participants signed up for cooking classes over the summer session – with area youth making up 75 to 80 percent of that total. Art Director Aimee Geist reported similarly high numbers, with 305 individuals having signed up for summer classes – not far off from last year’s totals.

“Given that we did not do the theatre program this year, which I still think was an excellent choice, that puts us only about 30 to 35 people off from summer 2019,” Geist said.

So far, Geist noted 225 people have registered for arts classes in the fall, which is neck and neck with the entire 2019 fall session already with additional classes in October, November and December yet to open.

If you need any additional evidence for how well-received the Hubbard Arts Center has been, look no further than the impromptu session created in the gap between summer and fall after USD 260 postponed the start of the school year.

“The demand was there because after the summer session, when the school decided to delay the start, between Aimee and Debbie they offered more programs specifically just to youth for three weeks and again classes filled up,” said Director of Programming Vanessa Buehne. 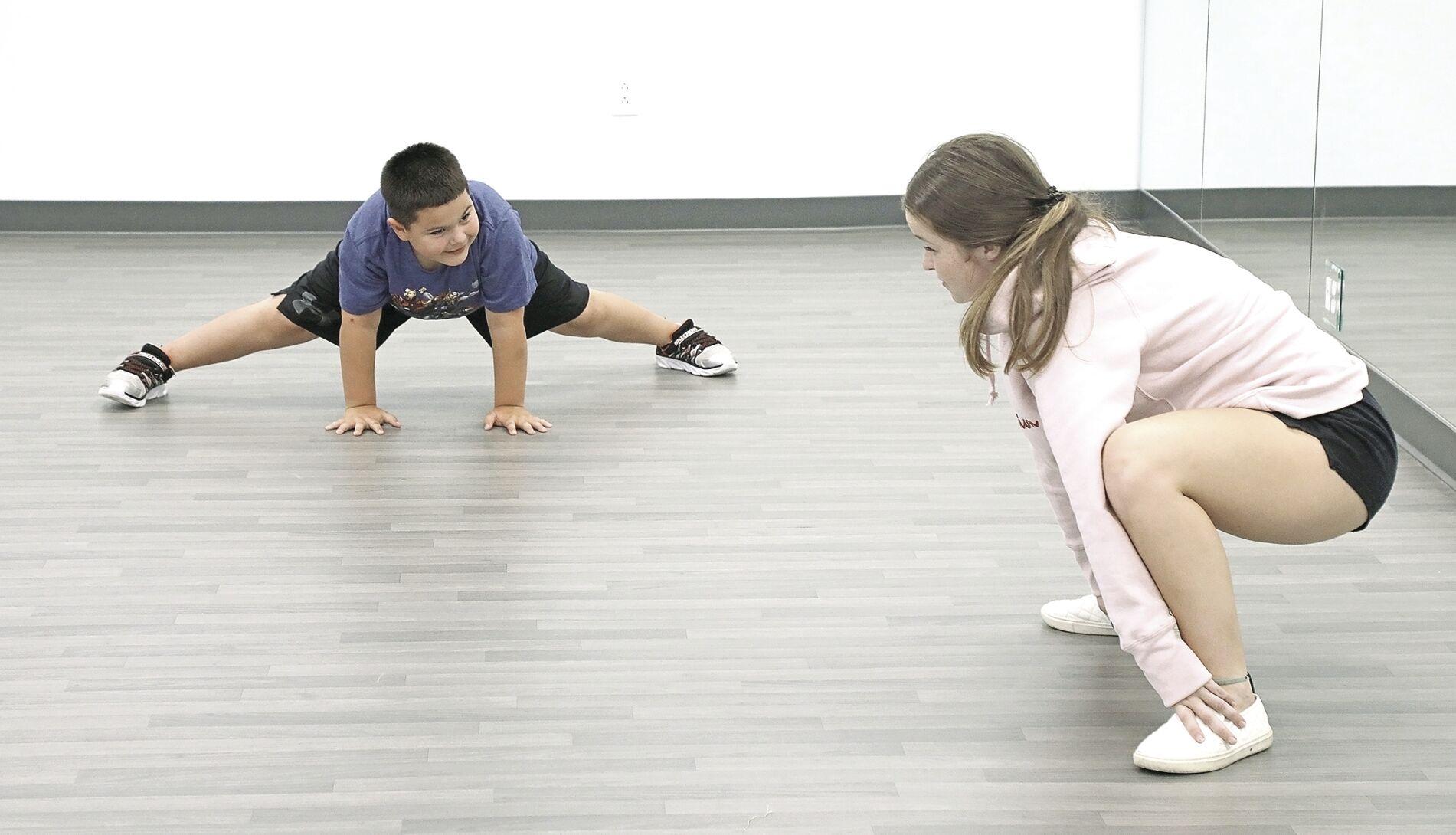 Young students warm up for a Hip Hop dance class at the Hubbard Arts Center – one of the variety of programs that have drawn area youth to the new facility.

Participation varies on a case-by-case basis in terms of how many can take a class, but DRC staff noted the comments they have received overall about the Hubbard Arts Center have been pretty positive.

While Wiliams pointed out the adult cooking classes turned out some low attendance numbers over the summer, the cooking education classes were the opposite – with a Keto masterclass in particular being extremely popular.

Among the arts programs, Geist pointed to a teen potter’s wheel class as a striking example of the continued interest in the new arts center. While that class typically only has a few sign up, the class of 12 filled up this summer and had a waiting list. When another class opened, that almost filled up as well.

Geist noted she is also hearing from people who were unaware Derby had a center dedicated to arts programs, with a great deal of excitement shared once they are made award of that.

“Before we were here, we were programming out of the schools for several years,” Drum said. “I think, without a doubt, there’s a market and a demand for this type of service.”

“I think just having a space for art, a dedicated space versus hopping around from place to place, kind of hones in on trying to provide the best programming for the community,” Williams said. “We’re all about serving our community. That’s our number one mission is to serve the community in whatever capacity we can.”

Having a dedicated arts space has also allowed the DRC to bring in programming in areas it hasn’t been able to in the past – namely in cooking and recording with The Cove, a new digital media studio. That has allowed the DRC staff to take the lemons 2020 provided and make a little bit of lemonade, as Geist put it.

Now, the DRC and Hubbard Arts Center staff are working to keep the building “new and shiny” by continuing to offer unique and different programs. Staff has been seeking feedback from participants on what they want to see, which has already led to a pasta-making class being added in The Kitchen this fall.

Looking to continue bringing people in, the rental facilities at the Hubbard Arts Center were also just opened for reservations as of Sept. 21. While Drum noted there is not a lot of data out there on that usage, staff noted there has been plenty of interest and tours going on in those spaces.

Community outreach is something staff are looking to facilitate through the Hubbard Arts Center, as the communal experiences of the classes offered is something they want to highlight – whether in or outside of the building.

So far, staff noted they have also seen a lot of fresh faces in the Hubbard Arts Center and they are hoping that trend continues into the future.

“Our mission is to embrace the spirit of the community and I think that’s exactly what we’ve done,” Drum said. “Being able to create so many different things under one roof, we’re really proud of that.”